Bhairava or Bhairab (also written as Bhairav) is considered as an important deity of the Newar community. He is also considered as the brother of the living goddess Kumari. Bhairav is said to be the most dangerous form of Lord Shiva, the destructor. In every Newar settlement, at least one temple of Bhairav is found and most of these temples are maintained by Newar priests. There are several temples of Bhairav in the Kathmandu valley and each holds some significance and also a myth behind their existence.

Some of the temples of Bhairav in the Kathmandu valley are: 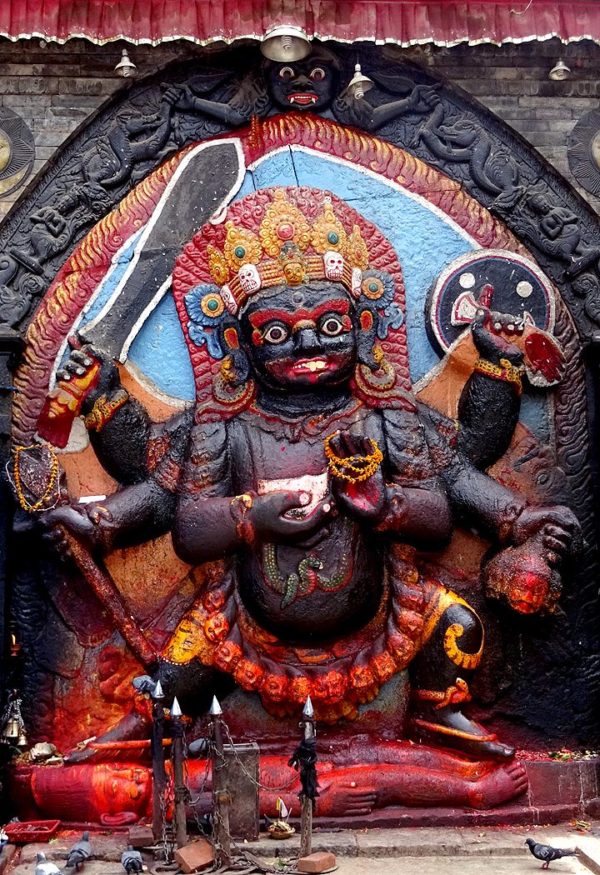 The temple of Kala Bhairav is situated in Hanuman Dhoka Durbar Square in Kathmandu. The temple has a 12 foot high stone image of Kala Bhairav sculpted in the 5th or 6th century and was later rediscovered in a paddy field in the 17th century by King Pratap Malla. It is believed that the people who speak lie in front of this sculpture would die, hence, it served as a supreme court in Nepal for a long time. It is believed that back to interrogate the guilty in front of this statue and wait for their confession. The statue is black in color , as its name suggests, Kala means black or dark. 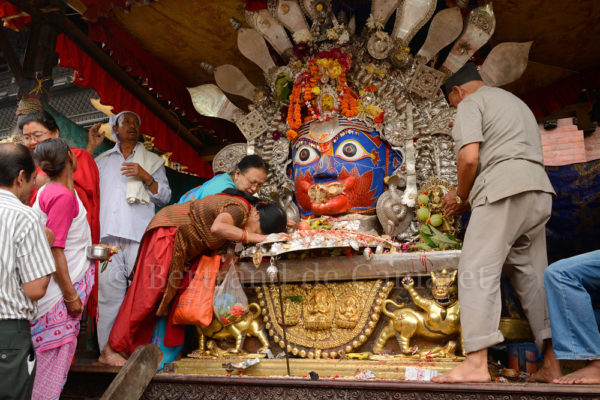 Akash Bhairav also known as the “god of sky” is enshrined in a temple that is situated in Indra Chowk near the Hanuman Dhoka Durbar Square. The statue is brought out  for the public to take blessings for a week during Indra Jatra. The statue is decortaed with colorful flowers, ornaments and garlands.The statue is one of the calm forms of Lord Bhairab and it is blue in colour , like the sky.

The temple of Bagh Bhairav is situated in the village of Kirtipur on the outskirts of Kathmandu city. The Lord is considered to be the guardian deity of Kirtipur. The god is also known as the ‘tiger god’.

The image of Unmukta Bhairav is enshrined inside the Pashupatinath temple premises on the northern side of the temple.

Shanta Bhairav also known as Majipa Lakhey Dya is enshired in a temple in Kathmandu. As the name suggest, he is the peaceful (Shanta) Bhairav and is considered as the protector of children. 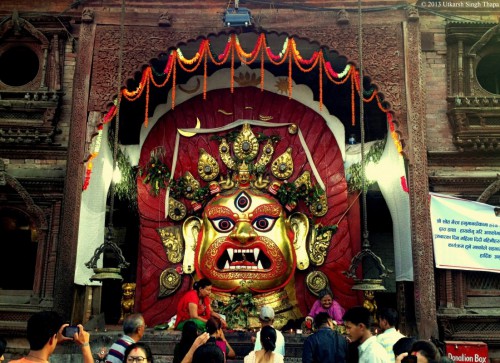 Swet Bhairav, literally meaning ‘the White Bhairav’ is the biggest idol of Bhairav in the world which depicts the most dangerous face of Lord Shiva. It is kept hidden inside a wooden curtain throughout the year, and taken out only during the festival of Indra Jatra. However, a Buddhist priest is said to perform puja everyday behind the curtain.

Kirtimukha Bhairav is the most dangerous and hideous forms of Bhairav. This Bhairav was created by Lord Shiva to fight with Rahu but only a sight of him was enough to scare off Rahu.