Guna Cinemas situated at Gwarko, Lalitpur has eight different halls (screens) inside the same building. The halls are divided into hall Ka, Kha, Ga, Gha, Nga, Cha, Chha and Ja, named after the first eight letters of Nepali alphabet. In hall Ka, Cha and Ja, the Hindi movies are screened while the other five halls screen Nepali celluloid movies. However, the Nepali movies made in digital format are screened at hall Cha.

Among these eight different halls, hall Kha, as most of the people can guess, is the biggest and only screens the Hindi movies. The new movies are shown in this hall and after the release of another, it is transferred to hall Cha, Chha or Ja. If the movie proves to be super hit, then it is screened at different halls at a time, maybe at certain time variation but more than one hall screens the same movie. Guna Cinemas, however, only screens Hindi or Nepali movies, maybe sometimes Newari as well (if it is released) but never an English movie. 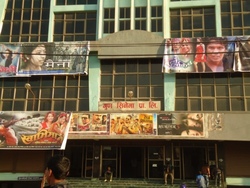 The ticket prices at the hall is affordable and comparatively lower than most of the big halls in Kathmandu with few exceptions. It also offers discounts of fifty percent on morning shows making it more affordable and cheaper than most of the halls in the valley. There are two ticket counters at the hall, one is at the main entrance at the ground floor, and another being an underground ticket counter with an underground entrance. The entrance tickets are bought at the respective counters, meaning that if you buy a ticket underground, you’ll be allowed to get in through the underground entrance that leads to the sitting area (hall) at the ground floor or the base. For sitting at the balcony or above, you need to buy tickets from the counter on the ground floor inside the main entrance. The prices vary according to the counter you are buying tickets at (underground being cheaper).

The bathroom is comparatively clean and the place has a wide parking lot besides its main building and you need not have to worry about your vehicle theft or anything as there is a guard sitting at the entrance to the parking lot.

However, if you are going there to watch a hit movie or a movie of popular actors like Salman Khan, Akshya Kumar, etc. better get there earlier to buy your ticket and reserve your seat and yes, you have to get there to reserve your seat as the tickets only give you entrance not a guarantee of the seats inside. Also, make sure to carry some tit-bits to munch on while you watch the movie (you can buy it outside) as the food counter is either totally packed or will be running out of the snacks. Nevertheless, if you want to enjoy movie in real fun way, with the actual cheering and whistles, Guna Cinemas is definitely a place to be. Although it does not boasts of sofas instead of chairs, the seats are comfortable and the movie experience is wonderful, especially when the hero appears on screen for the first time.