Ceremonies and rituals are part of our life. We observe many rituals and ceremonies during our lifetime. In a life of a Nepali child or a person, there are five important ceremonies.

The five important ceremonies in the life of a Nepali are:

It is the first ceremony in the life of a Nepali. During this ceremony, a child is named after some rituals are performed. According to his birth time, astrologer provides a letter and the child must be named with that letter itself and also the number of letters (syllable) for the name is predetermined. The child’s time of birth decides their zodiac sign and the name is kept keeping that on mind. It is performed in 8th day of birth for a girl and 9th day for a boy.

This ceremony is performed on 5th month for a girl and 6th for a boy. On this day, the child is fed rice pudding by the family members in a silver bowl with a silver spoon. Before this, the child only feed on mother’s milk and starting this they, they are fed with other mashed food. The auspicious time for the rice feeding ceremony is determined by consulting an astrologer.

This ceremony is performed only for the boys. When the boys reach certain age, i.e. 7, 9, 11, this ceremony is performed. However, nowadays, people perform bratabandha a day before marriage as well. It is a very important ritual when they are granted with the sacred thread and a secret mantra. It is said that chanting the mantra everyday will bring them good luck. It is performed by the Brahmin and Chettri community. Also, some other communities performs this ritual, however, they only wear the sacred thread on that particular day, unlike Brahmins and Chettris who need to wear it for a lifetime. An auspicious day is to be selected for this and the priest performs the rituals. Also, the person who gives the mantras to the boy becomes his guru (teacher).

This ceremony is performed only for girls. When a girl menstruates for the first time, she is hidden in a dark room where sunlight could not penetrate and also no male members are allowed to enter. For 7 days, the girl is kept hidden from the sunlight and male members of the family as seeing either of them is forbidden.

However, giving Guniu–Choli to the before she reaches her puberty is a way to keep her out from hiding. This practice has grown a lot in recent days as it is easier and comfortable. 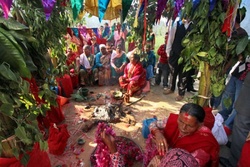 It is also one of the important ceremonies in one’s life and it is a long process as well, in the Nepali society. First of all, when parents decide their children to get married, they look for the perfect spouse for their children. Usually a lami (mediator) brings a relation offer and if the parents are satisfied with that, they will move a step ahead. After deciding on a person, their horoscopes are matched. If they do not match, the relationship shall not proceed and incase they match, a date is determined for the marriage ceremony.

On the day of marriage, the jantis (groom party) come to the bride’s house or the venue of marriage where the girl’s party welcomes them. Three important aspects of marriage are: the swayamber (ring exchange ceremony), kanyadaan (giving away the daughter’s hand), and putting the sindoor and pote on the bride.

This is the final rites performed in the life of a member of Nepali community. It is performed by the son of the deceased and if the deceased don not have a son, a male relative or the priest performs the rituals. The dead are taken to the bank of a holy river, most sacred being the bank of Bagmati in Pashupatinath. Once there, they are put on the funeral pyre and a fire torch is used to light fire to the pyre. The fire is lit from the side where the head is rested. This is called the Daagbatti .

It is believed that if a son gives daagbatti and performs these rites then the departed soul goes to heaven, else, they roam around the space in search of peace.