First introduced in 1998, Cable cars became very famous among the tourists and locals in Nepal. Cable cars are the small rectangular shaped aerial and cable based cars, which works on the principle of gondola lift transportation system. Despite gaining immense support from its customers within a short period of time, there are only four cable car services that operates in Nepal. 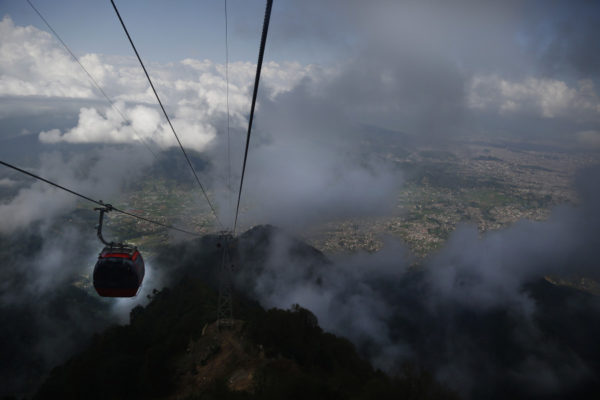 Situated in Kurintar, Manakamana Cable car is the first cable car service in Nepal. It was inaugurated on November 24, 1998, by the then Prince Dipendra Bir Bikram Shah Dev. Since its installation, it has gained huge popularity among the people of Nepal as well as the tourists. It has also increased the religious tourism in Nepal as the cable car service takes you to the sacred shrine of goddess Manakamana.

The cable car station is situated in Kurintar which is about 104 kms west of Kathmandu on Kathmandu-Pokhara highway. There are also some good restaurants and resorts for providing the accommodation and food services, especially to the tourists. The temple lies 12 km south of historic town of Gorkha and it is believed that the goddess fulfills the wishes of her devotees which is why she is regarded as Manakamana.

Opened in 2016, the Chandragiri Cable Car runs from Thankot to Chandragiri hills with 38 gondolas carrying 1,000 people per hour. It is around 2.5 kms from lower station and takes around 9-16 minutes to reach at the top of Chandragiri depending on the wind and situation. The hill is famous for Chandragiri Temple.

Chandragiri has emerged as an ideal hill-station to escape the city rush and enjoy the fresh air and the breathtaking view of hills and Himalayan belts. The destination has become one of the popular touring spots for both Nepali as well as foreign tourists. More hotels, restaurants and recreational activities are being planned to entertain the visitors. One way ticket costs Rs. 450 and return ticket costs Rs. 700 with discount for students, elderly people, locals and differently-abled people.

The country’s third cable car service, Kalinchowk Cable Car came into operation in November, 2018. It is being operated from Kuri village to the Kalinchowk temple and lies at an altitude of 3842 metres above sea level.

There are four cable cars with capacity of carrying 10 people each and the ticket costs Rs. 500 per passenger. Known as one of the popular hill station, especially in winter, the hill offers a breath-taking view of mountains like Lantang Himal, Ganesh Himal and Gauri Shankar Himal.

Unlike other religious hill stations, Sarangkot is mainly famous for its sunrise view-point. Thousands of tourists visit Sarangkot on daily basis. A cable car service is being constructed in Pokhara by Annapurna cable car Pvt Ltd. , that is accessible from Phewa Lake to the Sedibagar, Sarangkot.

The company will be investing around Rs 800 million with Entrepreneurs from Pokhara owning 55 percent, Japan Cable Car owning 30 percent and the rest of the shares owned by a Nepali citizen of Japanese origin. The cable car line will be 2.2 kms long and estimated 500KW electricity will be required to operate the cable cars. The cable car facility will be a major tourist attraction as people can enjoy the beautiful sight of mountains, green hills, lakes and valleys through the ride.