Bhairav is one of the most dangerous forms of Lord Shiva and among the various forms of Bhairav, Kala Bhairav is the most perilous one. The literal meaning of Kala is ‘time’ or ‘death’, hence, Kala Bhairav is also considered as the ‘Lord of time or death’. Considered as the guru of the planetary deity Shani (Saturn), Kala Bhairav is often depicted carrying the decapitated head of Brahma as it is said that the guilt of cutting out one of the five heads of Brahma made him carry the head and roam around as mendicant for several years until he was absolved of the sin. 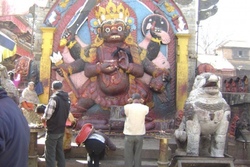 The lord is often depicted wearing ornaments of twisted serpents, tiger skin and a ritual apron made of human bones. The day of Bhairava Ashtami which falls on Krishnapaksha Ashtami of the Margashirsha month of the Hindu calendar is said to be the day when Lord Kala Bhairav had appeared on earth centuries ago. The day is celebrated with special prayers and rituals around the temple of the Lord.

The image of Kala Bhairav is situated in the Hanuman Dhoka Durbar Square premises in Kathmandu is said to be the largest image of the Lord and is also considered as one of the powerful temples in Kathmandu valley. The 12 foot high stone image of Kala Bhairav which is enshrined in the temple is said to have been sculpted in the 5th or 6th century and was later rediscovered in a paddy field in the 17th century by the Malla King Pratap Malla. Legend has it that the temple served as a supreme court in Nepal for a long time as the people believed that the person who lied in front of the sculpture would be dead by the powers of the Lord. The image of the lord is black in color and is worshipped everyday by the people living in the area and also, those who happen to pass by the image make sure to bow and pay their respects to the Lord.