Situated between Langtang and Manaslu range, Ganesh Himal offers excellent Mountain View and virgin culture. The place is closer to Kathmandu and you do not require a flight trip to be included in the trek which also makes the trek cheaper than the treks in the Eastern and Western part of Nepal.

The naturally rich area is not very high so there will be no problem regarding the Mountain sickness and you could enjoy the view as much as you like without being scared of getting nausea. The view of the majestic snow capped mountains, beautiful village, the wide and colorful jungle of various wild flowers and the presence of wildlife makes the place exciting and thrilling. And adding up to the enjoyment is the presence of friendly locals with their warm and welcoming smile and behavior. 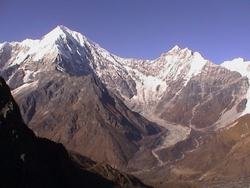 Although it is closer to Kathmandu, it has not been frequented by the tourists. The mountain situated in central Nepal, northwest of Kathmandu seems like soaring up to touch the sky. The area has various ethnic groups living under the same sky and their mixed lifestyle gives you a glimpse of life in hilly region of central Nepal. You could also get an opportunity to observe the Nepalese traditional practices up close and understand the culture of the people living in the region.

The area is not only rich in cultural diversity but also in biodiversity as it accommodates about 526 species of plants (including 40 species of orchids), and 300 species of birds. Besides these, the other wildlife to be explored here are Himalayan Thar, Gaur, various species of monkeys and musk deer. Singala pass, Pangsang Bhanjyang, Jaisal Kunda, Jyamrung are some of the place to be seen while you explore the area. Not only that, there are more than 40 mountains scaling over 6000 meters in height.

The area around Ganesh Himal is rich with Hindu and Buddhist cultural diversity along with the natural assets and the best time to visit the area is from March to May and September to November.