Neer Bikram Shah, commonly known as Neer Shah (also written as Nir Shah), is one of the leading actors in Nepali cinema industry. Related to the former Royal family of Nepal, Neer Shah is not only an actor but has multiple identities like that of a poet, lyricist, movie director, producer and a businessman.

He has acted on, produced and co-produced many Nepali movies along with directing several Nepali movies produced by himself. Some of the movies he has directed and produced are Basudev, Pachchis, Basanta, Basanti, Masan and a Nepal Bhasa (Newari) movie Rajamati. He has also co-produced the Oscar nominated Nepali movie, Himalaya – l’enfance d’un chef. The movie which was also released as Caravan in Canada and Himalaya in Denmark and France was co-produced and directed by the French movie maker Eric Valli. It also became the first film from Nepal to win an Oscar nomination. 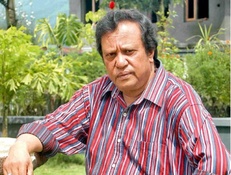 In most of the films he has acted on, he has played the role of antagonist or other characters like in the movies Prem Pinda and Balidan. He also appeared in a few Bollywood movies as a guest artist and has also penned down many Nepali and Nepal Bhasa songs. Some of his songs like Prem ko mala pahirai diye, samjhi rakha yeslai had been recorded by critically acclaimed singers like Narayan Gopal. Along with acting, producing, directing and writing songs, he has also written scripts for some of his movies.

He served on the jury of the festival of South Asian documentaries named Film South Asia ’01 along with Firdous Azim and Shyam Benegal in 2001. He had worked as the first head and the founder of Nepal Television (NTV), the first television station of Nepal. He is the chairperson of Shangri-La TV (STV), a film production and microwave TV Distribution Company which produced many programmers for NTV and also provided the cable television network in Kathmandu valley. He also holds 33 percent equity in a United Kingdom-based firm, Galaxy that is involved in telecasting Nepalese TV channels overseas.

He has set up a production company called ‘888 Films’ along with Nirmal Nicholas Paul, which produces Nepalese and Hindi films. National Studio, another company of his, provides training in various fields of cinema production and he is also one of the proprietors of a film production company called the New Century Pictures Private Limited. One who also serves on the Governing Council of College of Journalism and Mass Communication in Nepal, Neer Shah was felicitated by the Minister of Culture, Tourism and Culture, Tourism and Civil Aviation in recognition of his contribution in the ‘promotion of Nepalese art and culture and tourism industry’ in 2002. The man with the multiple identities, Neer Shah has played an important role in the development of the Nepali film industry.