Pagal Basti is one of the most popular novels written by Sarubhakta. The story starts with the mention of the narrator being on his journey to Ghandruk. The book being set into the place, which has become one of the most popular tourist destinations of today has also added up to its attraction among the young generation. However, as the book proceeds towards the second part, the story takes another turn where even the narrator seems to have gone out of the story the narrator becomes the third person from the first person. This has made the story telling experimental, however, the language of the book is easy and simple. It also uses some of the English words in between which make the conversation livelier. 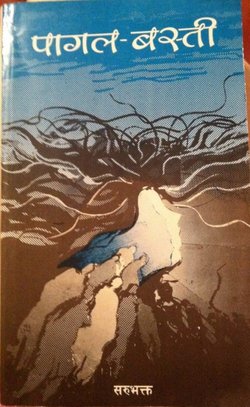 The book describes some of the interesting events and incidents, however, even then, the deep philosophy could be sensed and might leave the reader confused as where to focus, in the story or the philosophy. The major characters in the story are (Adiguru) Prashant and (Adimata) Martha and the major focus of the book is the continuous changes that occur in the mental state of these two characters. Both of the characters are dissatisfied with each other and both are guilty about their past. They have both started a journey of ending their dissatisfaction and facing their guilt. Prashat, who had loved Martha has changed into Adiguru after her refusal and Martha, however, realizes the value of love only after she rejects Prashant and she goes on a quest of finding him in the Adi village. But this is the time when Prashant rejects her proposal and instead changes her into Adimata. The emotions and thinking of Martha and her response towards the behavior shown by Adiguru is really interesting.

However, the ego that develops as Adiguru is deeper that a normal reader could understand and for understanding the philosophy of the book, one needs to be critical and analytical instead of simply reading the novel, one of the reasons for the story being more popular than its philosophy.

The characters, too, are affected by their human weaknesses and the only character who really deserves to be applauded is Premmurti, who do not posses any bigger human weaknesses. The decisions Prashant makes of deforming the village is quite unpredictable and the book, as a whole is quite interesting for the people.

The book Pagal Basti by Sarubhakta has also been awarded with the most prestigious Madan Puraskar and this deep philosophical book proves to be a good read for those who wants to gain knowledge as well as entertainment at the same time.