The artistic director and the Kul Guru (principal teacher) of Aarohan Gurukul, one of the most prominent and probably the first formal theatre group in Nepal, Sunil Pokharel is a household name in Nepal. Known as Nepal’s theatre guru, he has played an important role in enhancing and developing the scenario of theatre in Nepal. 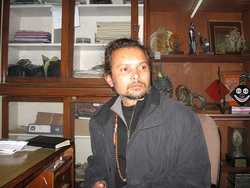 He, along with a group of theatre artists, established Aarohan in 1982 emphasizing on the holistic role for an artist. Aarohan is a theatrical group while Gurukul is a school of theatre and a cultural center and together, it is popular as Aarohan Gurukul. To achieve the position he is in today, he had to overcome many challenges, starting with the problem of identity. During the time he started out, the traditional society of Nepal did not look at the theatre professionals in a positive light and the sector was considered unproductive and un-intellectual making it difficult for him to convince or explain to people that theatre, indeed, was a good profession. Once when he had visited his village, someone had asked him about his profession and when he had replied that he does and they would retort as “but what work do you do?” Theatre was not an attractive profession to choose, financially as well as this sector is not recognized by the society or by the government which made explaining that this sector does require intellect as his first challenge.

Also, the financial problems and managing the finance and budget was another problem he faced while struggling to establish the fact that theatre, indeed, was a respectable work. He was also involved into the theatre activism and initially, he gave all his heart and soul to it, however, he was bored with “the propaganda street theatre” (not the street theatre) and gave it up. Nevertheless, he is involved with the forum (Kachahari) theatre which is performed in schools as well as streets. Although he did not have any source of inspiration as a child, he likes film actor/director Ramesh Budathoki and in terms of acting, he likes Naseeruddin Shah (Bollywood) and Dustin Hoffman (Hollywood) along with Hari Prasad Rimal for his realistic acting. He also prefers several theatre actors and likes the work of various theatre groups like Sarbanaam, among others.

One who likes Chekhov, Shakespeare, Bal Krishna Sama, Govinda Gothale and also Abhi Subedi’s plays, Sunil Pokharel is a pioneer artist who has made major contributions in the field of development of Nepali theatre. Also known as Nepali Theatre Guru, he had run away from home after his parents opposed to his desire of doing theatre. He is married to Nisha Sharma Pokharel, theatre artist and director at Aarohan.