One of the best places in Nepal, Bhaktapur is the perfect blend of authentic and modern worlds. Although, it is touched with modernization, there still are places where you could find authentic and ancient buildings and also some new buildings built in authentic designs. Situated at the center of Bhaktapur city is the Bhaktapur Durbar Square, truly a paradise on earth. The wide courtyards of the square accommodate old Malla palaces as well as some ancient and most popular temples. Also the temples and palaces are exceptionally carved in the struts, gateways, windows and lintels. It actually is a museum in itself that has preserved and conserved the history of our ancestors till today. It is a pride of our nation as one could be lost in its authentic environment and forget about the tall modern buildings and structures of Kathmandu.

There are some amazing and historically significant places to visit in Bhaktapur Durbar Square. Some of them are as follows:

The huge gate was erected in 1696 AD and is guarded by two huge statues of lions at the either sides. Also, the presence of the dreadful stone image of Lord Shiva and the fearful image of Ugrachandi has made this gate a major attraction for tourists. 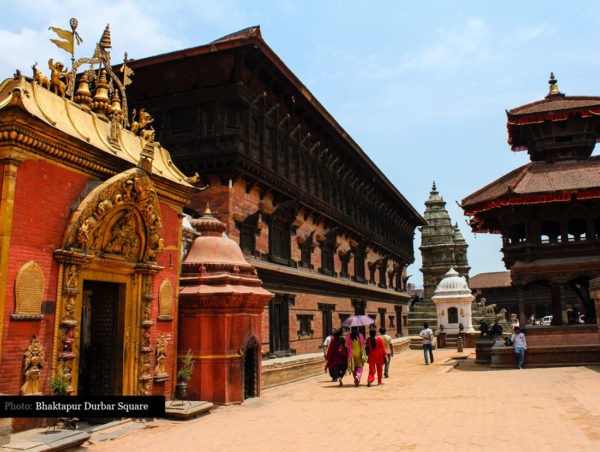 Said to be the most beautiful and richly mounded example of its kind in the entire world, the Golden gate in Bhaktapur Durbar Square was erected by King Ranjit Malla in 1753 AD. The door embellishing monsters and mythical creatures of marvelous sophistication is the entrance to the main courtyard of the Palace of Fifty-five Windows. It has great archeological, historical, religious as well as architectural significance.

The Palace of Fifty-five Window

This magnificent palace was built in 1427 AD during the period of King Yaksha Malla and was remodeled by King Bhupatindra Malla in the seventeenth century. This palace with a balcony and fifty-five windows is a masterpiece of woodcarving and one of the must-see structures in the square. It is one of the finest examples of the Nepali architecture of the period.

Also, considered as the museum for ancient paintings and manuscripts, the Art Gallery in Bhaktapur Durbar Square contains various ancient paintings belonging to the Hindu and Buddhist traditions of various periods and descriptions and is famous, especially among the researchers on these two religions.

The statue of King Bhupatindra Malla 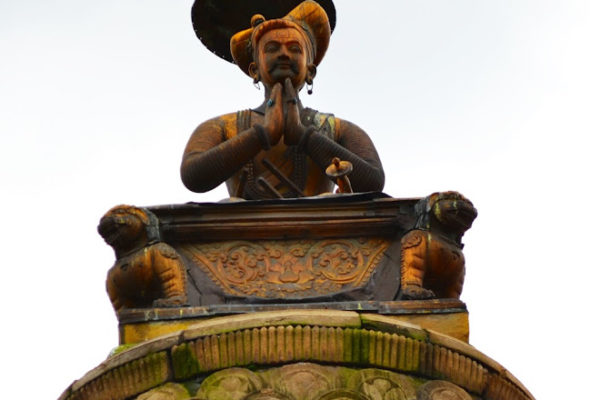 Located on a column facing the palace is the statue of King Bhupatindra Malla that depicts him in an act of worship. Among the many statues in the durbar square, this is considered to be the most spectacular statue. The son of Jitamitra malla, he was the one who continued his father’s ambitious work and completed the 55 window palace. 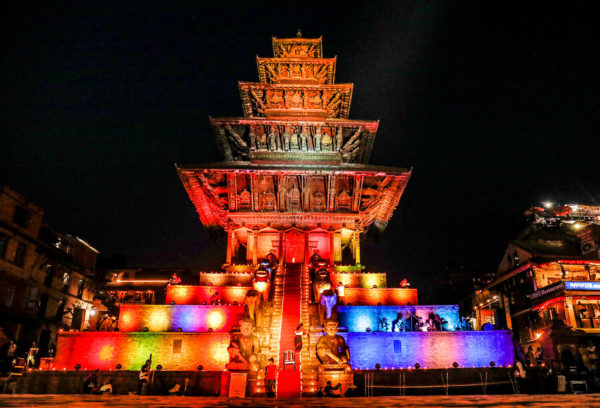 Built by King Bhupatindra Malla in the year 1702 AD, Nyatapola is a famous pagoda style temple in Bhaktapur Durbar Square. This temple dedicated to Siddhilaxmi, the tantric mother goddess of supreme power, is five storied. Nyatapola in Newari means a five tiered that symbolizes five basic elements that are, water, earth, fire, wind and sky.

Unlike the famous Pashupatinath temple in Kathmandu, this Pashupati temple in Bhaktapur Durbar Square is smaller in size. According to folklore, one night, a native of Bhaktapur who also was a great devotee of Lord Pashupati had a dream where the Lord asked him to build a temple so the Lord could move into it. Thus, the temple was built.

Dedicated to a mother goddess, this 17th century stone temple is full of complex works on stone and is one of the beautiful examples of the 17th century architecture of the place.