Situated on a twin hillock about 5 km southwest of Kathmandu, Kirtipur is an ancient 12th century town which was then an independent kingdom and the last stronghold of the Malla kings when Prithvi Narayan Shah marched in to conquer the valley in 1769-70. The kingdom had withstood a prolonged siege and the Malla army had taunted the Gorkha forces as they hurled them back down to the fortress-like hill. Those insults came out to be their mistake as Prithvi Narayan Shah ordered his men to amputate noses and lips of all Kirtipur men apart from the musicians who played wind instruments when he conquered it.

The reminder of the battle now, is the ruined walls remains of Kirtipur, which is a place of trade and sheltered learning. Kirtipur is a beautiful place rich with the presence of cultural and religious heritages. One is the Chilanchu vihar laying on top of the hill to the south where a huge stupa is encircled eight shrines decorated by the stone images and there are many other Buddhist monasteries around the stupa. Another attraction is the restored temple of Uma Maheshwar which is situated on the hill to the north. This area and its surrounding also see the existence of some Hindus who have settled down here. Standing proudly at the highest point of the saddle between the two hills is the three storied temple of Bagh Bhairav which is a place of worship for both the Hindus and the Buddhists. Decorated with swords and shields taken from Newar troops after the Gorkha‘s victory, the temple contains an image of Bhairav manifested as a tiger and the turn above the main Miktum shows Vishu riding Garuda. 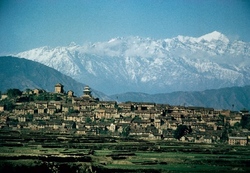 The magnificent views of the valley and the brightly in colored patch-work of farm fields below with the villages of Panga and Nagaon in its south-east can be seen from here. The Panga village that was established by the Mallas as a fortress town to stall invaders from the north can be accessed via path that goes through the rice fields in Kirtipur. There are around six temples in the area, none of which dates beyond the 19th century. From Panga, the path continues to Nagaon (meaning ‘new village’) and a part of the Tribhuvan University’s campus spreads across the farmlands near this city.

The traditional occupations of the people living in Kirtipur are spinning and weaving, apart from farming and about nine hundred people works at the Kirtipur’s Cottage Industry Center that produces spin fine cloth for sale in Kathmandu. Kirtipur has suffered more by the ravages of the rather than the natural disasters. The town can be approached by a long flight of steps leading to the town settled on the saddle between the two hills beside a small lake. Most of the people in the area prefer to walk through the fields (shortcuts) rather than the main road or taking a bus or a microbus in this ancient town of Kirtipur.