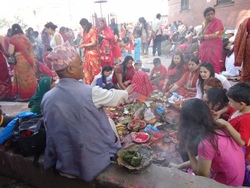 A group of women performing the Rishi Panchami puja. They worship the seven saints and ask forgiveness for any mistakes they made during their menstruation period. 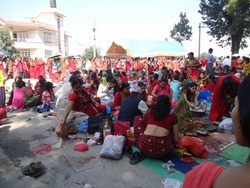 Women performing the Rishi Panchami puja while others waiting on a line for their turns to worship the Sapta Rishi. 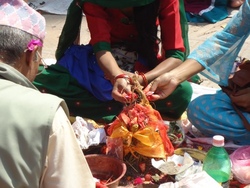 Unmarried girls performs the Sapta Rishi puja. The hill like structure seen in the photo graph is considered as the image of the Sapta Rishi and the holy offering is made around it. 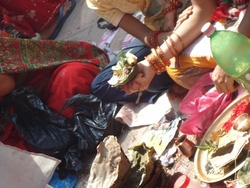 Girls performing the Gau Daan (giving away a cow to the priest as a gift) ritual. It is considered as one of the most important and sacred ritual.