A city in the central-southern part of Nepal, Bharatpur is located in Chitwan valley and is the district headquarters of the Chitwan district. It is also a separate Municipality authority and is the fifth largest city in Nepal. Lying in the bank of Narayani River, it also serves as a commercial center of Chitwan district and central region of Nepal. It is approximately 146 km from Kathmandu, 126 km from Pokhara, 114 km from Butwal, 128 km from Birgunj, 78 km from Hetauda and 67 km from Gorkha. It is also accessible by regular daily flights from Kathmandu. 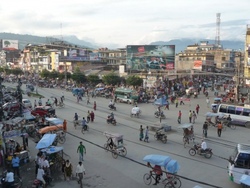 Nepal’s leading cancer hospital, B.P. Koirala Memorial Cancer Hospital is also situated in Bharatpur along with other infrastructures like schools, colleges, shopping areas, etc. The main industries of Bharatpur are small scale processing industries along with a large number of poultry industries being developed. It is also said that more than sixty percent of the poultry demand is covered by Bharatpur alone. Other minor productions of the city include honey, mushrooms, floriculture and service industry (health and education). The food processed in Bharatpur is sold to major cities in the country which makes Chitwan a food surplus district. Also, the multinational companies like Coca-Cola, San Miguel and Lady D Bols are situated in the city along with a large number of business and trading houses. The city being at the central position along with the crossroads is one of the reasons that have increased the wholesale and retail trading function here making the place one of the first choices for the major companies across the country to open their branches in the city.