Ghodaghodi Lake, maintaining a delicate balance between culture and nature 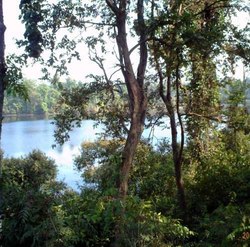 One of the most eco-diverse lakes in Nepal, the Ghodaghodi Lake is located on the slopes of the Siwalik Hills in the Kailali region of Nepal.

Ghodaghodi literally means male and female horse. It is believed that the lake took its name from two Hindu deities, Shiva, the lord of destruction and Parvati, his consort. Lord Shiva and Parvati often visited the lake in different forms. A hermit once came upon the deities and turned them into horses. Clueless of what do next, they spent their time circling around the lake. Hence, the lake got its name Ghodaghodi Lake.

On the day of Shivaratri every year, pilgrims flock to the lake in thousands. People come from as far as from India to get blessed by the lake on this auspicious day. They make a wish and throw coins in the lake in the hope that the wishes get fulfilled. Couples come to marry at this sacred place. Some others come to enjoy the beauty of the hills just nearby.

The Ghodaghodi temple beside the lake is yet another cultural attraction. People make horses, elephants and tigers out of clay and offer it to the temple. This might be one of the strangest offerings to God in the entire world.

Besides this, the lake also holds ecological significance. The lake is a rich wetland area. The area is surrounded by patches of forest and includes a number of shallow oxbow lakes, with a multitude of ponds, marshes, wide open meadows and streams. It is in this idyllic setting that some of Nepal’s vulnerable and critically endangered species are found. These include the majestic Bengal Tiger, Marsh Crocodile, Red-crowned Roofed Turtle, Three-striped Roofed Turtle, Eurasian Otter, Smooth-coated Otter, Swamp Deer and Lesser Adjutant Stork. Around 140 species of different birds can be sighted around this wetland, some birds migrating from as far as Siberia and Mongolia during the winter season.

No wonder, even the Gods could not stop themselves from coming to this beautiful place every now and then.