Guthi Sansthan is a socio-economic organization in the Newar community. It is a kind of common trust consisting mainly of cultivated land as assets. Most of the members are of the common descent group but there are also some larger Guthi Sansthans which include several descent groups. Incase of the Jyapu (Newari farmer) community, most of the Guthi lands are cultivated by the members themselves but the rest of the land are leased out to tenants or rents. The rents collected are used to worship the deity of the land or for the arrangement of fish for all the members. 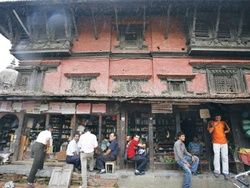 Guthi Sansthans are of three types:

Every Newar family is the member is of the Religious Guthi for worshipping the deity of extended family. This Guthi onsists of the members belonging to the common descent group.

In Newar community, this Guthis are organized especially for cremation of the dead, conducting funerals, maintaining temples, rest houses, roads, etc. it might include members of several caste, levels and different religious groups.

It is organized for pure entertainment, fellowship, and activities of common interest. It is a voluntary organization including the members of one common locality in the Newar community.