Covering an area of 1,002 sq km, Mahottari district lay at an altitude of 61 m to 807.7 m with Jaleshwor as its headquarters. Jaleshwor, meaning the ‘God of Water’, is also a major town in the district and shares the boundary with the historical city of Janakpur. The place also houses a famous temple of Jaleshwor Mahadev (temple of Lord Shiva in water).

This town is also a border town that is situated a few kilometers away from the Nepal-India border. It is said that Mahottari was a part of the Mithila principality (kingdom of King Janak and the birth land of Lady Sita) in the ancient period. Legend has it that the soil from Matihani was used in the marriage ceremony of Lord Ram and Lady Sita. Also, the locals remembering the Tasmaiya baba chants the Tasmaiya hymn here. 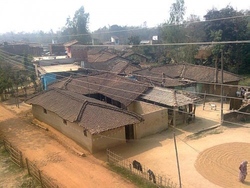 It is said that a local Brahman named Mahodari constructed a big pond in the area which was named after his name. As the time passed by, people misspelled Mahodari to Mahottari which gave way to the present name of the district. The district fell under Makawanpur state before the unification of Nepal and it was in the year 1762 AD that the King Prithvi Narayan Shah conquered the district. The major ponds in the district are Mahottari Pokhari, Barun Sar and Bhargais Sar with the main rivers in the district being Banke, Bindhi, Goge, Jangha, Megha and Rato while the major places to visit here are Jaleshwor, Matihani, Ratabara, Gaushala, Sona Maisthan and Haraphuka Gaun.

The district of Mahottari shares its border with Dhanusha in the east, Sarlahi in the west, Sindhuli in the north and Bihar (India) in the south. The predominant language and cultures practiced here are Maithali, Nepali, Magar, Tamang, Abadhi, Newari, Sherpa, Tharu, Gurung, Rai, Bhojpuri, Danuwar, Limbu and Sunuwar.