A unique festival, Teej is widely-celebrated in Nepal, as well as in certain parts of India, but only by Hindu women. A major aspect of the festival is religious fasting and through this, every woman aims to be blessed with marital bliss, the wellbeing of their husband and children, and to purify their own body and soul. For the unmarried, they will be praying to be blessed with a good husband. 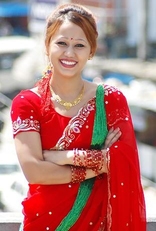 Falling on Tritiya of Bhadra, the celebration of Teej, lasting three days, supposedly came about when Goddess Parvati fervently prayed for the great Lord Shiva to become her spouse. It touched Lord Shiva, who then made her his wife, making Parvati send in gratitude her emissary to spread the word of religious fasting among mortal women and promising them of longevity and prosperity in the family. 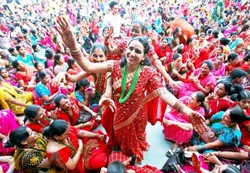 Throughout the festival, Nepalese women can be seen clad in bright red saris and shiny emerald-coloured potes, or necklaces made of tiny glass beads strung together. They sing mainly devotional songs and dance to the tune along the streets, in temples, at organized venues or at individual homes. The festival is observed in three days where on the first day, women dance, sing and feast. It is after midnight that night that fasting finally begins. Temples devoted to Lord Shivas will be filled with women, with the Pashupatinath Temple bearing the most devotees. Puja takes place and offerings are made for the Gods Shiva and Parvati. Men, however, will not be seen on these grounds.

On the final day, called Rishi Panchami, women undergo an act of purification in the form of baths in red mud found on the roots of a sacred datiwan bush. They will now have been absolved for all their sins.

Teej is also said to be a celebration of the arrival of monsoon after a season of hot and humid weather. The red colour that is prevalent in Teej also comes from the name of a red insect which comes up from the ground when it rains.