Interested in the world of drama since childhood, Uzzwal Bhandary is a popular face in the Nepali television world. More popular as Ujju Darling, Bhandary entered into the field of drama in the year 2037 BS through a performance in a drama called ‘Asamapta Katha‘ together with his brother Sailesh Bhandary. The one who influenced and guided him into the world of performance and introduced him to the stage was Govinda Singh Raut who was also the director of his first drama.

Born on 25 August 1970, Uzzwal Bhandary was the fifteen and the last child of his parents. Out of fifteen, only eight of them had survived, however, after the death of his elder brother, seven of them are alive. He is married to Puspa Khadka and has two sons together.

As a child, Bhandary used to visit Rastriya Nach Ghar and spend the evening watching the comic drama. Instead of finishing school work, Bhandary was more interested in presented the act in front of the family. He and his brother were the best pair until the latter left to settle in USA. He completed his schooling from Laboratory Madhyamik Bidhyalay, Kirtipur and Durbar High School. He has completed his Masters degree and is passionate about acting and performance.

One who performed during the stage programs in school, he worked as travel and tour executive and English speaking tour guide in one of the leading travel agency for more than eighteen years before he started his own company named ‘Mount Everest and More’ international travels and tours.

He was invited in live talk show from Belgian National Channel in November 2002, one of the proudest moments of his life as a Nepali actor. He was also appointed as writer and international liaison at Variety International Film Guide, where he has been writing about Nepalese cinemas since 2002. 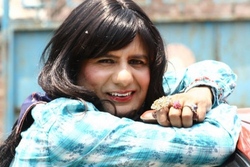 He started his acting career from street drama and was also the founder of Sarwanam Theater group. They started the concept of street dramas due to financial reasons as they did not have money to book the big hall and also the audiences would not have money to pay for the tickets. So, in order to cover the financial problems, they set the street drama where anyone could watch it free of cost. This not only made them popular but also resulted in many following the trend. He started his television career in 2042 BS with a television serial Antaral and then acted on Ek Raat, based on the story of B. P. Koirala. He was also cast on many other serials like Hijo Aajaka Kura and others with the MaHa pair. He has played in numerous dramas and about ten to fifteen movies and gave up acting in movies altogether as it did not give him satisfaction. He has also directed few radio programs and is widely known as Ujju Darling because of his chat show of the same title.