The festival of Guru Purnima

Celebrated on the full moon (Purnima) in the Nepali month of Ashadh (June-July) of the Shaka Samvat, Indian national calendar and Hindu calendar, Guru Purnima is the festival of worshiping the gurus or the teacher. Derived from two Sanskrit words, Gu meaning ‘darkness’ and ru meaning ‘remover of that darkness’, Gurus considered as one of the most important part of one’s life.

Traditionally celebrated by the Buddhists in the honor of the Lord Buddha who is said to have given his first sermon on this day, this festival is celebrated by the Hindus in the honor of the great sage Vyasa, one of the greatest ancient Hindus gurus who wrote Mahabharat, gathered all the Vedic hymns existing during his time and divided them into four parts (Rig, Yjur, Sama and Atharva) based on their use in the sacrificial rites and teaching them to his four chief disciples. Vyasa was believed to have been born on this day and also he is said to have started writing the Brahma Sutras on Ashadh Sudha Padyami that ends on this day. Hence, among the Hindus, this festival is also known as Vyasa Purnima. 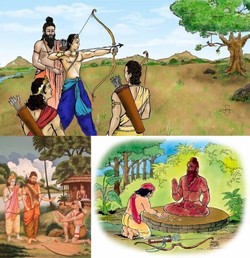 The festival is celebrated by all the followers of spiritual traditions in Hinduism and the Hindu ascetics and wandering monks (Sanyasis) observe this day by offering puja to the Guru. Everyone who has the guru-sishya tradition or the teacher-student relation in Hinduism celebrates this festival throughout the world. While according to the Buddhist traditions and religious history, it is the day when Lord Buddha gave his first sermon to his first disciples, who were also his former companion, after he got enlightenment. Buddhists observes Uposatha, eight principles on this day. This day also marks the start of vassa or the rainy season and during this season, the Buddhist monks remain in a single place, usually in their temples, or spend the while month in intensive meditation. Also, many Buddhists adopt the ascetic practices like giving up meat, alcohol and smoking.

On this day, Vyasa Puja is also conducted at various temples with floral and symbolic gifts are offered in his and the cosmic satguru’s honor. The distribution of Prasad and charnammrita (the symbolic wash of guru’s feet) is also conducted. This day also observes the recitation of the Hindu scriptures, especially the Guru Gita authored by the sage Vyasa. The students in the schools and colleges also celebrate this festival by giving gifts to their teachers.