Amrit Ratna Shakya, a differently-able person, believes that self-confidence and passion for work along with enthusiasm to prove himself are the keys to his success. Although he is diferently-able, he is on his way of becoming a successful entrepreneur, however, the path he walked in was not an easy one. He had lost both his legs in his early childhood because of polio. Since he was diferentially able, it was difficult for him to complete his education, however, he completed his SLC examinations as a private student.  After completing his schooling, he wanted to learn vocational skills and since he was interested in fashion designing, he asked his parents to find him a trainer who could teach him to sew. He acquired vocational skills and following his tutor’s suggestion, he joined s NGO named Khagendra Nawajeevan Kendra (KNK) located at Jorpati. 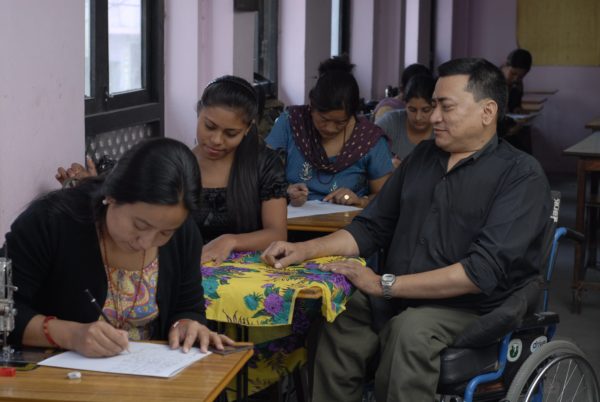 But because of his physical state, he became the center of humiliation and unfriendliness. However, with the help of a Japanese volunteer who took on the task to train him, he acquired basic skills. He, later, started a small business of his own from small room in his house with a hand sewing machine that cost Rs 900. Although initially he faced lots of trouble and obstacles due to late payments, disgrace from snobbish clients, etc. he later opened up AR Fashion Design and Sewing Institute in 1991, following the suggestion of his friend. There were only six trainees in his first batch, however, now (2012) there are eight trainers ad three hundred trainees in his institute that runs six shifts a day.

The institute offers different courses such as six months basic course, three months special course, a year-long diploma course, two year fashion designing course and dress designing course. The cost of the basic course is Rs 600 where as the cost for dress designing is Rs 4000 per month. The man who remains up-to-date in his field, Amrit Ratna Shakya is climbing heights of his entrepreneurial success. The life of this man gives us an important lesson that to become a successful person, one must follow their dreams. The popularity of his institution is no more limited only among the home makers as the college students and professionals have also found their way into the institute. The man who provides trainings for differentially-able and victimized women at subsidized rates has been nominated for the prestigious Asha Award.