Old as old itself, the Changu Narayan Temple has a history that dates back to around 3000 years. Perched on a hill, the temple stands majestically over the rice fields of Bhaktapur, around 22 km away from Kathmandu.

The temple is a UNESCO World Heritage Site today. 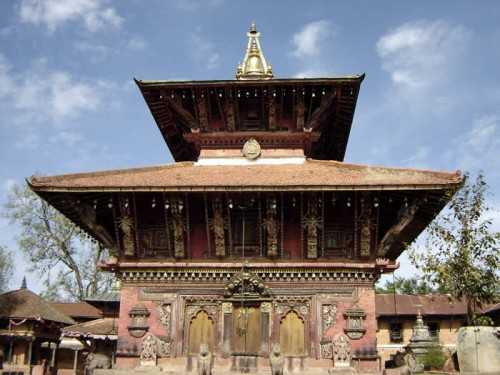 The temple of Changu Narayan was originally built in the 4th century during the Lichhavi Dynasty. It was rebuilt in 1702 after a major fire occurred.

The Changu Narayan temple is a double-roofed temple dedicated to Lord Vishnu in his incarnation as Narayan. The temple is decorated with ten incarnations of the Narayan. Stone lions guard all the four doors of the temple.

Garuda, half-man and half-bird is the vehicle of the Vishnu. A life size stone statue of Garuda kneels in front of the west face of the temple. There is an inscription stone behind the statue. The inscription provides important information on the Licahhavi dynasty and on the history of Kathmandu valley. In front of the temple’s main entrance, in a ornate cage, there are smaller statues of King Bhupatindra Malla and his queen.

To the north of the temple is the statue of Vishnu seated on a Garuda. The sculpture dates back to the 9th century and is yet another attraction in the area.

The temple’s true gem are the much older sculptures dotted around the courtyard. The statue of Vishnu in a half man and a half lion incarnation called Narsingha is something not be missed. It dates back to 464 AD. Another statue shows Vishnu as Vikrantha/Vamana, the six-armed dwarf who later transformed into a giant. To the side of these images is a small black slab showing a 10-headed and 10-armed Vishnu.  The beautifully carved image is around 1500 years old.

You can easily find a bus in Kathmandu that will take you to Bhaktapur. From there, you must take another public bus that run along the 6 km route between Changu Narayan and Bhaktapur.

Another option is to walk take a bus or taxi to Changu Narayn and then walk via the villageof Jhaukhel. The route passes through small villages and farmlands that are always bustling with activity.

Regardless of age and nationality, everyone has to pay Rs 60 to enter the premises of Changu Narayan.

Although Changu Narayn has a collection of statues and sculptures, Changu Narayan is also famous for its beautiful crafts in wood, stone and metal. Everything in and around the temple is a genuine work of art. So make sure you have scrutinized each and every corner of Changu Narayan.