One of the major festivals of Madhesh or Terai, Chhath Parva is dedicated to the Sun-god and is observed on the fourth day of the lunar calendar during the month of Kartik – Mangsir (October – November). The rising and the setting sun is worshiped during the festival. The festival lasts for four days.

On the first day, known as Arba Arbain or Nahan Khan, the devotees keep fast by discarding meat, garlic and onion and eat clean and ‘pure’ food. The second day is Kharna, which is observed to reduce the sin committed by the devotees and the third and major celebration is known as Chhath when the puja is conducted. The devotees go to the pre-decorated rivers and ponds singing folk and devotional songs. There are tent like structures made around the pond or on the river bank on which the devotees keep their holy offering and also stay the night, without sleeping. The fourth day, however, is known as Paran or Parwana that signifies the end of the puja after making offering and worshiping the rising sun. 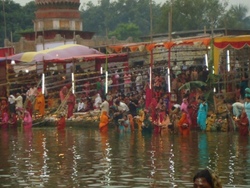 The festival celebrated after Tihar has great significance, especially for the married women who observe two-day fast and offer prayers while keeping almost three-quarters of their body immersed in water for two hours. The devotees listen to the stories of the Chhath fasting, also the Surya Puran, after conclusion of the Argha or the offering of the curd to the setting sun. Also, the story of a greedy mother-in-law and her daughter-in-law is told.

The Hindu holy script Mahabharat mentions that the Pandavas and Draupadi observed the fast with sun worship for the successful completion of their exile.

On this day, the lakes, pond and rivers are beautifully decorated for the celebration, with lights, tents and flowers. The elements for worship are kept inside these tent-like structures and the devotees spend the night there without sleeping and staying Jagram (awake). Devotional songs and bhajans are played on the loudspeakers that are kept in most of the tents by the devotees. There is the tradition of taking either one or three rounds around the pond during the celebration and not only those who keep fast and have a tent around the pond but also everyone else takes the round of holy site.

Also a small fair with balloons and cheap toys for kids are conducted around the area. Most of the pond and the rivers in Nepal are the sites for celebration of Chhat Parva not only in Terai but also in Kathmandu. Moreover, the Rani Pokhari is also opened on that day for the Chhat celebration. 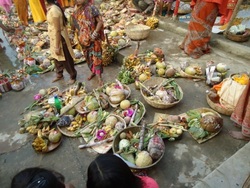 It is said that the god fulfills wishes of the devotees, especially the ones who are keeping fast. And it is also observed that most of the devotees have had their wishes fulfilled after taking the fast, however, the fast of Chhath Puja is one of the most difficult fasts in the Hindu religion as it has too many restrictions and not a single mistake is allowed. Most of the people give Kuniyas (that has the holy offerings) to those who take fasts in the name of their family for the better and healthy life or for some other wishes they have instead of taking the fast themselves. However, the ones who give the kuniyas are supposed to be present during the festival for conducting the puja on their kuniyas.

Chhath Parva is one of the major people of Terai and not only the Madhesi community but people from every community observe the festival by keeping fast or in other ways.