One of the leading hotels in Nepal, The Dwarika’s Hotel is located in Battisputali, Kathmandu. There is an interesting story attached to its establishment and the reason for it being as cultural museum in itself. It happened when it’s owner Dwarika Das Shrestha was operating a travel agency in Delhi, India.

It was the time of the coronation of new king of Nepal, King Birendra Bir Bikram Shah Dev. For the ceremony, many people, diplomats, etc had come to Nepal but due to the higher number of tourist, not a single room was available in Kathmandu anymore. So, in order to provide a place to his foreign guests, he moved into a rented apartment along with his family leaving his home (where the hotel stands today) for the guests as a guesthouse. It was with their positive remarks that he got the idea of establishing a hotel in Kathmandu. The story behind it having a traditional looks go even further back. 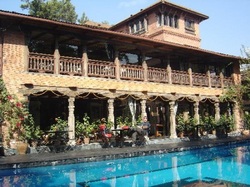 It happened in 1952, when he was jogging one morning, he noticed some carpenters sawing off a portion of a wonderfully carved wooden house pillar. The old house was being replaced with a modern building and when he inquired about the pieces of the woods, they informed him that it would be used for firewood. Realizing that the country’s cultural heritage was going to be destroyed, the thought of preserving them came to him. It first started as a passion and then, a life quest, which, even after his death, is carried on by his wife and daughter. He used those beautifully carved windows, doors and pillars into building his culturally rich The Dwarkia’s Hotel, which stands as a unique blend of traditional outlook and modern facilities indoors was registered in 1977. The hotel is internationally recognized, more so, after winning the Pacific Area Travel Association’s first PATA Heritage Award for preserving Nepal’s ancient art of woodcarving and its Newar architecture in 1980.

It also runs a workshop for woodcarving which was first started with some families of traditional carvers for mending old and broken wood carvings and later was also used for giving trainings and creating new carvings.