Khim Bahadur Gandarbha is an old, well-traveled talented musician as well as a revered teacher living in the place called Batulechaur, a deep gorge in the back of Pokhara that feels endless with steps cut out that head down into a deep, dark, black mass topped with vivid green grasses. Just below it is a old-fashioned congregation of simple houses and cabins that serves as the traditional home to Ghandarbha community of Nepal.

Gandarbha is one of the many caste or ethnic groups of Nepal, traditionally, a landless caste of wandering Gaines or ‘minstrels’ who play the Sarangi (a violin like instrument found throughout the villages and towns of Nepal). During the time when Nepal was completely influenced by caste system, this community survived on their instruments and their abilities as Gaines (singer). They are also the traditional singers and there was a tradition which made them learn Sarangi essential, which was, a Gandarbha who did not live by the Sarangi could not even marry the daughter of another Gandarbha. 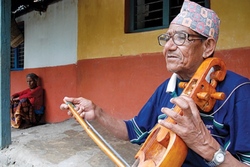 Khim Bahadur was born in 1992 and when he was only two years old, his father passed away which is why he was raised by his mother with support from local relatives. His maternal uncle gave him the Sarangi when he was seven years old and made him practice for two hours every day. Those were the time when everything in the life of Gandarbha revolved around Sarangi. When he reached 13 years of age, he went on a tour to India with some friends and while he was there, he played for the local expatriate Nepali community. Impressed by his talents, they offered him to stay in India and join their own traditional band. He stayed there for two years until he came to know that his family and relatives were worried about his whereabouts as there was no system of communication apart from letters (which due to illiteracy was not possible). He, then, returned back to the lap of the mountains in Batulechaur.

He later moved to Chitwan as a landless squatter or refugee where he spent twenty two years of his life. Those times were not as golden as the present in terms of tourism development in Chitwan and it was hard to meet ends. After leaving Chitwan and returning to his ancestral home, he took up Sastriya Sangeet (classical music) under Ranga Rahu. He was the most accomplished and talented student of his teacher among the 30 students as he had realized that he had to be able to depend on skills other than just playing popular contemporary Sarangi music if he wanted to have a fuller life.

He started teaching more than a decade ago with the hope to pass on the knowledge and tradition gathered from a lifetime of accomplishment. He has taught more than 250 students about the traditional way to play Sarangi and his students are from Batulechaur to as far as Mexico and Finland, America and Switzerland. He has been honored with many awards and recognitions and his tiny home is adorned with pictures and medals describing the story of his success and achievements. He had also received a medal from Chairman Mao, the late leader of China and from King Mahendra along with a lifetime recognition award by Pokhara’s Rotary Club for his dedication to teaching at Pokhara’s Institute for the arts, the Sangee Prashikshan Kendra.