Makai or Maize is one of the popular food items in Nepali kitchen. Found in many forms and cooked in different ways, maize is popular throughout Nepal in all regions. There are many ways of eating maize in Nepal and one of them is making Makaiko Roti or flat breads of maize.

It is popular, mostly in western Nepal and in hilly region where maize is major source of subsistence. Making this dish is easy and similar to making the roti of wheat flour. This article discusses two ways of making makaiko roti. 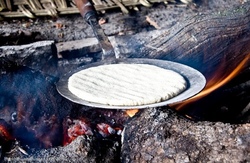 Pinch of salt (avoid during fast)

First of all, take a large mixing bowl and put flour in it. Then add ghee and salt and mix it well. Now, knead the flour into soft and smooth dough. When the dough is ready, make small dough balls and flatten it into round shape. Flatten it further into a thin round sheet like structure and then heat a flat pan (tawa). When it is heated (not completely hot) put the flattened dough on it and cook it like you make the common Sukkha Roti. When it is cooked, serve it not with vegetable curry or pickle.

For Gheruwa or Gili Roti

Salt or sugar (according to your taste)

First of all, mix salt and water to the flour in a large mixing bowl. Don’t pour water at once, but put it little by little. When it is made into a thick paste that could be dropped by the spoon, put a tawa to heat on medium heat. When the tawa is slightly heated in all parts, pour a spoonful of the flour paste and smoothen it equally on all sides. After a minute or so, flip it over and cook on the other side. When both sides are done, take it out and serve it with achar or vegetable curry.