The Roti is Nepali flat bread made from the wheat flour, traditionally known as atta. The word roti is derived from the Sanskrit word rotikᾱ meaning ‘bread’. It is one of the most popular Nepali foods usually served for lunch or dinner. It goes along with anything and everything, from meat to vegetables to lentils or even milk, honey, jam or ghee (clarified butter). 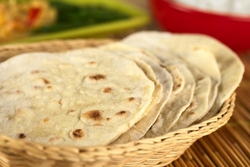 This free food is common in most of the Nepali household as a dinner item as it is light and healthy. It is normally eaten with cooked vegetables or curries and is cooked on a flat iron pan called tawa. It could also be served with tea or chutney or pickle as a snack. It is light and is considered good for health. Also, the diabetic patients are encouraged to have three to four sukkha roti (as the dry roti is called in Nepali) instead of having rice twice a day.

There are various types of rotis. The dry ones are known as sukkha roti in Nepali, parathas, daalroti,puri, etc. One can have the kind of roti they prefer. Paratha is made in similar ways to the sukkha roti, except for the use of ghee in it. Because of the amount of ghee used, parathas are usually heavy and could be eaten only with pickles as well.

The process of making roti is very simple. Take a large bowl and combine flour, melted butter, salt and sugar. Add a little milk and water and knead it until soft dough is formed. Keep the kneaded dough under cover for half-an-hour. Divide the dough into small balls then flatten the balls into circles, it is usually done by belna (rolling stick) and pihri (flat wooden surface).

Now, heat the tawa on medium heat. Place the roti  in the tawa and turn it after 30 seconds. Turn it again when small air pockets emerges and cook for another minute. Use a soft towel or a piece of cloth and gently press the roti so that more air pockets emerge. When the roti starts to puff, take it out of the pan and put it wrapped in a towel or container. The roti tastes best when served hot.