Sesame seed known as Teel, in Nepali, is one of the most important ingredients in Nepali household. It is found in every Nepali home in one form or the other. Sesame seeds are considered sacred and holy and are used in holy offerings.

Usually sesame seed powder is used in the kitchen which is used as pickle or as an ingredient used to make one. The seeds are used while worshiping, in pujas or yagyas. It is considered as a sacred seed which is mixed with barley seeds and offered to the god. Also, the ball cakes (laddu) are made out of sesame seeds, especially during the festival of Maghe Sangrati.

Sesame powder pickle (Til ko achar or chhop) is one of the most popular pickles used in almost every Nepali kitchen. The tangy taste of the pickle has been able to attract foodies since ages. Not only the Nepalese but also anyone who savor the pickle develops a taste for it. The pickle could be eaten dry or used to prepare other pickles of potato, cucumber or radish. Sesame powder pickle is easy to prepare and tasty to eat. 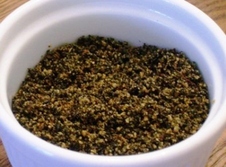 First of all, take a pan and put it on stove to heat. When the pan is hot, pour the seeds into it. Now, roast the seeds but be careful as it might burn and the whole thing will be spoiled. Let the roasted seeds cool off. Grind it when it cools off. Then, add salt, grinded ginger and chili powder to taste. Add some lemon juice and mix all the ingredients well.

It can be served fresh or preserved for a long time if stored in a glass bottle. It can be served with traditional Nepali meal or could be used to make other pickles as well. It is considered good for health as well.