Child Birth Past and Present

Child birth, be it in past or present, has always been a reason for happiness and joy around the world without an exception of Nepal. However, there are some speculation and traditions related to child birth practiced in Nepal for centuries now. Although the practice has been modified or changed over time, in most of the urban part of the country, it is still prevalent in most of the rural areas.

Usually in the past (still in the remote areas), unlike in today’s urban areas, the pregnant women used to do as much work as she did otherwise and to the point of delivery of the child (apart from being at night), she can be seen working and doing her daily chores. Most of the babies, then, were delivered while they were bringing fodder from the forest, on the way home or inside room (most often for safety concerns). Until the naming ceremony was conducted, the mother and the baby were considered untouchable and impure and were kept away, mostly in a cow shed, however, only the male members were not allowed to enter and also the rays of the sun was blocked. They, however, received care in terms of healthy food and massage of mustard oil to fight of the chill which is said to penetrate the fragile body of a new mother. Also, soups like Jwanoko Jhol, Khuttiko Jhol and items like Methiko Kheer, that gave instant as well as long term energy, were fed to them. 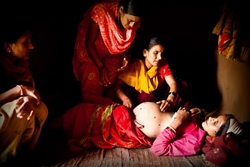 Many mothers died while child birth or afterwards due to lack of proper health care as visiting a doctor was new and unknown and even those who knew it, considered it as a privilege they were not entitled to.

However, with rapid modernization and development (at least up to some extent) in Nepal, the tradition has been changing. The hard labor has been replaced by exercises, home bed and old women (or sometimes, although rare-midwives) replaced by skilled and trained doctors and hospital beds and cowsheds by the comfort of warm bed. Although the naming ceremony and traditional diet is given to the child and the mother (depending upon situation as some food items had adverse effects on those who had an operation), the tradition of keeping her hidden from the males and the sun has been stopped. Also, the death of the mothers during child birth has come near to extinct due to increased awareness and development in medical facilities.