A municipal town in Saptari district, Rajbiraj, also the headquarters of the district is one of the first towns of Nepal established after proper town planning. It is located at 25 km west of the Koshi Barrage along the east west highway and the way to Rajbiraj diverges at Vardaha bus stop. The people living here belong to different Terai communities like Yadavs, Rajputs, Tharus, Kayasthas, Telis and Muslims and also mountainous communities like Brahmin, Khastriyas, Newars, Rai, Limbu and Magar along with Marwaris. Because of the mixed social and cultural communities residing here, the socio-cultural structure of the place is unique in comparison to other places. The most common language used here is Maithali, Nepali and Marwari. 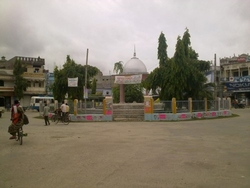 Especially during the festivals of Dashain, Tihar and Chhat, Rajbiraj looks like a heaven with the decorated temples and pleasant music and hymns playing in the temples. People, from women to men to small kids, visit the temples early morning during the festival of Dashain. The temples of Bhagawati are crowded by the devotees waiting for their turns to pay their respects to the goddess. The presence of the famous pilgrimage sites such as Chinnamasta Bhagawati also known as Sakhada Bhagawati and the Rajdevi temple has added to its glory. It also accommodates the temple of Bhaisnav Devi and many other big and small temples. Festivals are celebrated with real delight here in Rajbiraj be it Dashain, Tihar, Chhat, Krishna Astami, Maha Shivaratri, Holi or Saraswati Puja. The temples are decorated during the festivals and fairs are held on the temple premises. Thus, all these celebrations and festivals make this place rich in cultural heritage.

It also houses Nepal’s largest post box. There are around four FM stations here, the Sagarmatha Zonal Hospital, Vet nary Hospital, one movie hall, fire-station, bus station, an airport and various schools and colleges. Also, the Unique College is present here which is popular among the students of nursing in Nepal as many students from around the country come to study nursing and pharmacy here.

Rajbiraj is a well planned town which has separate place allocated for various purposes. The market area is different from the temple area. It houses various shops and stalls and the sections for selling vegetables are different than that of selling mud utensils. The bangle shops are in separate section and a different line is there for the jewelry shops. There are two different courts that are District Court and High Court. The C.D.O. office and other offices, etc. are in particular area as well. Thus, the town is well planned with the particular areas for particular purposes along with the several passages at certain distance.

Rajbiraj is rich in terms of cultural heritage as the people here still believe in practice of traditional rites, rituals and values. It is easily accessible by road as direct day and night buses provides daily services from Kathmandu and also day buses gives services from various parts of Nepal. One can also get access by jeep from Rupani and tempos and micros from Vardaha to Rajbiraj.