Ani Choying Dolma is an exceptional singer, well appreciated by fans both far and near. People are moved by the purity of her voice and the haunting melodies of her songs. 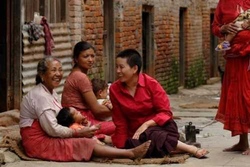 Ani Choying Dolma was born in 1971 in Nepal. At the age of 13, she joined Nagi Gompa, a Buddhist nunnery in Kathmandu valley to escape her physically abusive father.  Both her education and spiritual education were supervised in the nunnery itself.

It was in 1994 when guitarist Steve Tibbetts visited the nunnery that Ani’s musical journey began. Then, she began recording the melodious Chö songs in 1996, and the first album, Choying Dolma and Steve Tibbetts Chö, was released in 1997. In the spring of 2000 Ani Choying’s second CD was released, Sina Vodjani & Choying Drolma Dancing Dakini. Immediately after this release, she began to record her third CD, Choying, in a local Kathmandu studio. Ani Choying recorded her first Nepali CD Moments of Bliss with local musicians in Kathmandu itself and released her album in 2004. Again in 2004, she released another album with Steve Tibbets- Selwa (meaning ‘clear’) for Six Degrees Records.

Ani Choying is now an internationally reputed singer of Buddhist hymns and chants who has toured extensively in North America and Europe. She is a philanthropist dedicated to the welfare of Buddhist nuns, who founded the Arya Tara School in the year 2000 for nuns. The school runs with the help of proceeds from her concerts tours, CD sales and donation. Now that the Arya Tara School has been built, complete with fields for growing organic vegetables, clean and orderly classrooms, well-equipped computer lab and a thanka painting school, she is working on building a kidney hospital, and has dreams for a retreat center. And we know Ani very well: she won’t stop until her dreams come true.

Today, the whole world knows about her struggles and hardships through her autobiography Phool ko Aankhama.