Established as a national level category “B” financial institution licensed from Nepal Rastra Bank (the central bank of Nepal), Vibor Bikas Bank Limited (VIBOR) commenced its operation in October 2007. The bank merged with Bhajuratna Finance and Saving Company Limited in pursuit of strengthening strategic competitiveness and started joint operation from September 02, 2012 with the vision of “Together for Better”. The bank is dedicated to the services of those entrepreneurs whose courage and imagination are the source of inspiration and hope to all of us.

“Every aspiring and committed entrepreneur in Nepal has access to right form of capital to embark and continue on a journey of converting economically and socially profitable ideas into reality”, this statement is considered as the vision of the bank which have making capital accessible to more and more entrepreneurs and enhancing their productivity as its mission. 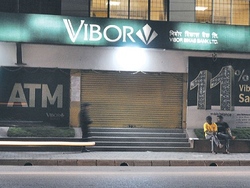 Vibhor Bikash Bank dreams of Nepal where entrepreneurship is not the privilege of few. So for fulfilling that dream, the team of the bank continuously strives to make capital accessible to more and more entrepreneurs and enhance their productivity. The bank which considers honesty in work, sincerity in relationship, respect for self and others, care for resources, responsibility for one’s action, service orientation and respect for laws and regulations as its guiding principles and values have objectives such as expanding savers’ choice through continuous innovation of products and services, enhancing entrepreneurs’ productivity and growth through financial and managerial support, being a role model in management of custodial capital, providing healthy work environment for young professionals to learn, serve and grow and providing attractive return on promoters’ and shareholders’ investments.

Promoted by non-interfering, trusting and open-minded one hundred and eighty one people coming from diverse backgrounds, the bank was established with the Authorized Capital of NRs 2,240,000,000.00, Issued Capital of NRs 1,450,000,000.00 and Paid Up Capital of NRs 916, 174,100.00. The bank has five branch offices at different locations inside and outside the valley.