Indra Jatra is one of the major street festivals of Kathmandu Valley celebrated at the Hanuman Dhoka Durbar Square. It is celebrated for eight days each year in September. It begins on the 12th day (Dwadasi) of the bright fortnight (waxig moon)of lunar month Bhadra and concludes on the 4th day (Chaturthi) of dark fortnight (waning moon) of Lumar month Ashwin. This festival is named after God Indra, the God of Rain and the King of Heaven. 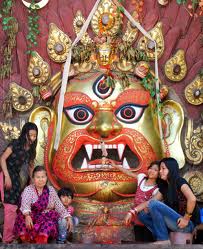 Many people, especially living in the Kathmandu valley come to celebrate this festival. On the first day, a huge wooden pole is erected in front of the Ancient Royal Hanuman Dhoka Palace. The pole is carefully selected and cut in the Nala forest of Kavre district. A flag of Lord Indra is tied at its top. A young male goat is sacrificed to the forest deity before bringing the pole to carve. The giant mask of Aakash Bhairab is brought out in open for three days which otherwise remains locked out in caged bar throughout the year.  Local Newari ethinic groups pour home brewed beer into the mouth of Bhairab for which people later compete to get a sip. Classical dancers also gather around the courtyard of Hanuman Dhoka Durbar Square wearing different traditional costume and mask and dance to celebrate the visit of God Indra.

It is said that very long ago, lord Indra came to earth dressing like a farmer. He wanted to take the Parijaat flower for his mother for her Puja. He found the flower but was caught by the owner of the land. The people tied his hands with rope and put him in display in the town square of Maru in Kathmandu. Indra’s mother was worried about him. When he did not return for a long time, she came looking for him. When the people realized whom they have captured, they immediately released him and apologized. Indra’s mother promised to give rainfall for the cultivating good crops and left with her son. This story is presented through the processions, dances and music every year during the eight day celebration of Indra Jatra. Also, the image of Lord Indra in captivity is displayed during the festival.

One of the major events of the Indra Jatra is the Kumari Jatra or Kumari festival that occurs on the third and fourth day. During these days, the three-tiered chariot or the Rath of Living Goddess Kumari is taken around Kathmandu. Also the chariot of Ganesh and Bhairav (Kumar) accompany Kumari’s. According to the Hindu beliefs, Ganesha, who has the head of a white elephant, is son of Shiva and Parvati and Bhairav is another form of Shiva himself.

The festival is celebrated with songs, masked dances and religious chants. Dasha Avatara masked dance shows the ten incarnations of Lord Vishnu. The head of the state comes to take the blessing of the Living Goddess on this day. On the last day, the long wooden pole is lowered with religious ceremonies, animal sacrifices and ritual gestures.