Mohan Sundar Shrestha is a seventy year old sarod player born and raised in Kilagal. He has dedicated more than forty years of his life into the music field playing the sarod (a classical string instrument similar to the sitar). Despite being born visually impaired, he has become one of the most acclaimed sarod players of Nepal.

He took vocal trainings at a very young age and then later shifted his interest towards learning sarod with his guru Late Narayan Prasad Shrestha. He used to practice every night from 11 pm to the wee hours in the morning as he loved the peaceful and quiet atmosphere of the night. However, he was careful not to cause trouble or disturbance to anyone and always practiced inside his room with all the windows and door locked. His musical journey began in the year 1970 and he has worked with the Royal Palace (retiring in 2007), Radio Nepal and at the National Theatre. He has been honored with the awards like Gorkha Dakshin Bahu and Trishakti Patta and many others. He still plays sarod for various programs at Radio Nepal and he has also been performing at Hotel De l’ Annapurna every evening except Thursday, for past few years. He has also performed at the Kirateshwor Temple, Yala Maya Kendra and Ram Mandir. 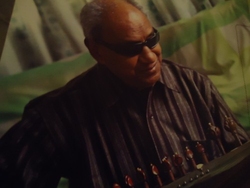 When he started his journey into the music field in 1970, he struggled very hard to get himself a permanent place at the Royal Palace which he got in the year 1986 and the moment when he got to perform in the palace for the first time has always remained the most memorable moment of his life. Although he still plays his sarod, he misses performing on the premises of Swayambhunath from 11 pm to 3 am in the morning.

He also teaches sarod practically but not the theory part. An avid lover of sarod and the classical music, Mohan Sundar Shrestha has been actually surviving by playing sarod. In a country like Nepal where music is only considered as a hobby and the artists find it hard to survive solely on music, to continue playing and surviving on sarod is definitely some great achievement.