Tsujil Karmacharya is a renowned name in the Nepali music industry. Born on 26 December, 1979, in a small village of Bhainse in Central Region of Nepal sharing his birthdays with some of the world famous musicians (Ulrich of Metallica and James Kottak of Scorpions), Tsujil is not only a singer but also a model, music composer and an engineer. He has various titles and professions added with his name and have gained popularity in short period of time because of his multi talented characteristic.

He used to watch the cultural shows organized by Rapti Club, a local club, which really impressed him when he was a child. He was inspired by his uncle who used to perform with the club regularly and later, he started walking on the steps of his elder brother. He used to sing and record songs into a worn out tape-recorder, playing the flute and harmonica and pencil sketching, etc. became his hobbies and he took all opportunities he got of singing at his school’s cultural programs despite his shy nature. 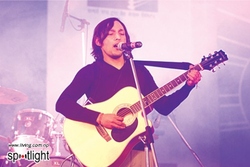 He picked up guitar for the first time at the age of 14. However, back then, guitars were not allowed in his hostel so in order to kill desperation, he tore a hard cover from an old notebook, shaped it into a guitar’s neck, drew lines to resemble fret boards in it and stapled it to give the feel of strings. This is how he learned his first few chords. Interesting, isn’t it?

He joined a music club named Yuva Sanskritik Manch in Hetauda after completing his SLC, which is where he met his future band mates. They used to perform gigs in and out of town playing Nepali, Hindi as well as English cover versions until finally, in 1995, they formed a band named The Seasons. The Seasons released their first album Khyal-Khyalaima in the year 1999, which was followed by Seasons in the year 2001. Later in 2004, they released the album 7×3=21. He graduated with a degree in Civil Engineering in the year 2002 and has been working as a recordist, arranger and guitarist at the Alfa A/V Studio ever since.

He has worked in many music videos and songs as a model and also music composer and guitarist. Among the various songs and videos he has worked on, some of his favorites are, Sugam’s Manko Dailo and Saathi, The Unity’s Ma Prem Ma and Aja Pheri, Raazen’s Mero Saano Gharama and Madzone’s Timi Hau Meri Manki Rani. The multi talented Tsujil Karmacharya added the letter “T” in front of his name to give it a Tibetan feel.