One of the beautiful novels based on the political, social, cultural and historical phenomenon of Nepal, Sakash is a 306 paged novel written by Nepali author Jagadish Ghimire. The novel revolves around three main characters Kumari, Sharad and Jiba, each with the story of their own to be told. The book starts at the Ashram of Deviji and ends with it. The characters, too, are connected to each other and their lives and story intertwined as the book progresses. 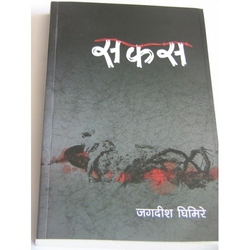 The lead character of the story is Sarad, a boy born from his alcoholic father and an innocent Nepali woman, who has been staying in the Vice-Minister’s security for survival. Another character is that of Kumari, who has been raped by her father and has been staying at Deviji Ashram. The third character in the story is Jiba who has become a minister through his struggle and effort made by him during the democratic strike in 2018 BS started by the Nepali Congress. Sharad is a reporter and Kumari is a nurse, who eventually gets married and become the supporter of Jiba during his last days. Sharad, frustrated with the pathetic condition of the country, leaves his home and makes a diary with the stories told by Jiba comparing it with present. Kumari has a small child who is raped by one of the leaders of Madhesi strike who also tries to rape her but she, instead, kills him in revenge. At last, she leaves the child at the same Ashram she had been living in, Deviji Ashram and the story ends.

The writer Jagadish Ghimire has been successful to present the history of Nepali politics, the ploy happening around the country and the life of the Nepalese. The book portrays the present leaders as an actor who are directed by a director to play their part rather than thinking by themselves. Sakas is a good read if you want to understand the social, political, cultural and historical aspects of the Nepalese society.