Apart from English, other language programs are offered as a two year course which is divided into four semesters where the first two semesters constitute ‘Ordinary Level’ and the last two semesters constitute ‘Advanced Level’. It also offers a Post-Advanced third year course in Nepali language program which includes the study of Nepali Grammar, history, culture and literature. Moreover, the campus has also started a third year Japanese language course while English language program is divided into two levels known as ‘Basic English’ and ‘Advanced/Writing English’. 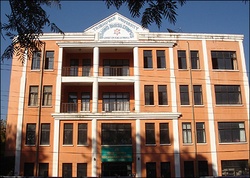 The well trained and experienced faculty constituting of Nepalese as well as foreign nationals, provide high standard language courses to the students. In order to teach the Himalayan Languages, it has native speakers while for foreign languages, either Nepalese teachers or foreign native speakers of respective languages are called for. However, the campus offers foreign languages only to Nepalese students while it offers Himalayan languages only to foreign or non-Nepalese students. Each class has thirty students apart from the CIL classes. The well furnished and well equipped classrooms have the facility of audio visual means to aid the teaching and learning process. The course aims to make students capable in four basic language skills known as listening, speaking, reading and writing (LSRW).

Dividing each semester into three equal parts by two internal assessment tests, the semesters are concluded with final examinations where the students must secure at least sixty marks in each exam to get promotion to higher level courses. The tests are titled as Grammar, Reading Comprehension, Composition and Dictation, Listening Comprehensive and Reading/Recitation and Viva-voce/Oral. The campus uses modern visual laboratory (donated by the Japan Foundation), audio visual aids such as films, video films and audio-cassettes in the classrooms for effective teaching. Moreover, the campus encourages research on the languages taught, especially on Nepali language and related topics. One example of it is the Nepali-Korean dictionary and a project on Nepali proverbs.

The campus also offers opportunities to the outstanding students to go abroad (Japan, Spain and China) for further study in those languages. The campus also offers language scholars if someone wants to research in any language taught at the campus, translation services are provided by the teachers whenever needed on governmental, non-governmental, organizational and individual basis. The campus charges certain amount of fee for the Language Proficiency Test (LPT) of any language taught here.