Established on 29 Magh, 2063 BS, Youth FM came up as a medium to address youth issues, build leadership, develop empowerment, create enthusiasm and provide inspiration and effective guidelines for youth as well as youth empowerment and employment. The station with the slogan, Just Youth, came into existence as a result of a need for some dependable medium which could address youth issues and provide inspiration and effective guidelines for the scattered and vulnerable youth of the nation.

It started with a mission of ‘youth empowerment, employment and development of the country through the communication technology’. Located at Kumarigal,Chabahil, the FM station has seven branches in different parts of Nepal that broadcasts in 96.8 MHz of the FM making it the only FM station in the country that broadcasts in the same frequency all over the nation. This private FM station broadcasts from Kathmandu, Pokhara, Sindhupalchowk, Nepalgunj, Bhedetar, Birgunj and Chitwan and covers about forty-nine districts of Nepal, among which 16 districts from the central station in Kathmandu alone. The station that boasts of about 7.1 million audiences (listeners) broadcasts from 5 am to 11 pm. 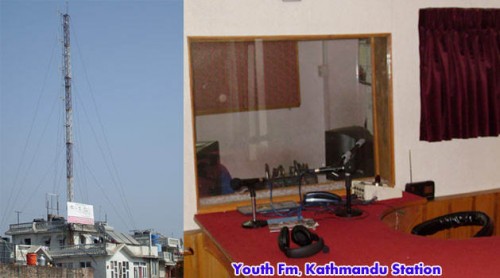 Most of the programs it broadcasts are focused for youths, which according to it, comprises of the population from 14 to 40 years of age. Its news contents are more development oriented than political as it wants to establish optimism and positive psychology among the youths through their thoughts, speeches and activities. It also focuses on education as it believes education to be the most important medium to bring positive changes in society. It has developed partnership with forty-five schools of the valley for its programs and although they pay a specific amount of money annually, they are provided free advertisements.

One of the major programs of the station is ‘Youth Forum’ where more than ten thousand youths have participated in discussions so far. It discusses various issues of youths, including their problems and their own ideas to solve them.

It broadcasts news every three hours and there are six staffs working in News section, 14 in programs and 16 in technology in its central station. The station’s revenue largely depends on the proceedings collected from the ads of school, college and banks and also other ads depending on the ‘seasons’. The station plans to establish a TV station that is focused on the youth issues.