Established more than three decades ago by Dinanath Bhandari as a roadside food stall near the Tribhuvan International Airport, the restaurant has today grown into one of the largest restaurant chains in Nepal. The name came from the founder itself as the customers used to refer to Bhandari as Baje which later became the brand name of the restaurant. The first restaurant was opened at Sinamangal followed by other four at different locations in the capital. As Bhandari himself mix and put together the spices and other necessary ingredients, no one except him knows the recipe and it is also said that the marinated meat is distributed from Bajeko Sekuwa at Sinamagal to other branches around the city every morning. 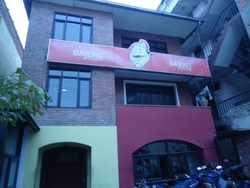 Although the restaurant offers other food items, the dishes one should try here are its trademark sekuwa and other meat items such as hyakula, plain sekuwa, etc. The restaurant also offers fish and vegetable sekuwa which is not found elsewhere. The place serves to all kinds of customers from businessmen to students to families, etc. Besides Sinamangal, the other outlets of Bajeko Sekuwa in the capital are situated at Battisputali, Nayabazar, Anamnagar, Sorhakhutte and Gairidhara.

The restaurant, today, offers more than hundred varieties of food including different varieties of sekuwa and the price of the items varies accordingly. The proprietor of Bajeko Sekuwa plans to open twenty outlets across the country in the near future. Although they do not believe in advertising their restaurant in the media, they cater to around seven hundred to thousand customers per day and are confident about the quality of their services. Rather than the paid publicity, they believe in mouth-to-mouth publicity and it is their service and cuisines that attracts so many people to the restaurant. Along with establishing more outlets, they also plans to start selling frozen ready-to-cook marinated sekuwa from the restaurants which will also be available in all leading department stores.