Bhadrakali is one of the powerful goddess of Nepal. Located near the Sahid Gate at the eastern side of Tudikhel is the temple of Bhadrakali. Also known as Shree Lumadhi Bhadrakali, the temple is considered as one of the most renowned “Shaktipith” of Nepal. A form of Goddess Kali, Bhadrakali in Sanskrit means “blessed, auspicious, beautiful and prosperous” and she is also known as “Gentle Kali”. Another mane for the goddess is Lazzapith. 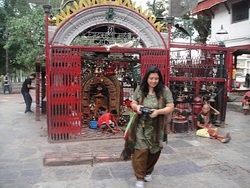 The ancient writings in the Vayu Purana and Mahabharat explain the creation of Bhdrakali by Devi’s wrath when Daksha insulted Lord Shiva during the great Ashvamedha Yagya (Horse Sacrifice). Tantra Rahasya mentions her rising from the north face of Lord Shiva, (Uttaramnaya Amnayas) which is blue in color and has three eyes.

She is often believed to take on a terrible aspect that is represented with three eyes and four, twelve or eighteen hands carrying a number of weapons with flames flowing from her head and a small tusk sticking out from her mouth.

According to the myths, a farmer used to plough some nearby land and kept his food (bread) on the side. The bread used to turn into gold so the temple got its name as Lumarhi/Lumdi Devi’s temple as Lumdi in Newari means ‘golden bread’.

It was built in the year 1817 and was previously known as “Mudule Thumpko”. The temple is believed to be built after Goddess Bhadrakali told the priest to dig the hill where they found the statue of the goddess. Since then, the temple lies there and is protected by Nepal Army. It overlooks the Singha Durbar, Prime Ministerial office, on the eastern side.

According to another legend, a tantric practitioner named Saswat Bajra went to Kamaru Kamachya in India and worshipped Shri Bhadrakali. The goddess was happy with him and came to Nepal with him in a holy water pot (a Kalash). He went to run some errands hanging it on a tree at Jamal on the northern side of Rani Pokhari. But Kalika took the form of a small girl and walked away. A farmer met her on his way to the field and questioned her but she fell asleep at the same spot and he went away. He could not find her when he returned but saw Kalika’s incarnation instead. Then, Saswat Bajra also saw the goddess and the place was established as the temple of Bhadrakali.

King Ratna Malla started the Astamatrika and Bhadrakali dance together which takes place every twelve years. Also on April 10th, there is a Bhairav Bhadrakali Jatra every year. People come to the temple with the hope of getting their wishes fulfilled. Often marriage ceremonies take place here and also the families sometimes use it as the picnic spot. Maximum number of devotees throngs to temple during Dashain and Ghode Jatra.

Amidst the chaos of the center of the Kathmandu city, one can definitely experience peace of mind at the courtyard of Bhadrakali temple.