Cardiologist Dr. Prakash Raj Regmi might not been known to all the Nepalese but he is certainly famous in the medical world and among his patients as one of the best Cardiologist in Nepal.

He studied in St. Xavier’s High School, however, he gave his SLC exams from Padmodaya High school. Then he joined Amrit Science Campus for ISC and went to Russia for his MBBS and MD in cardiology. He did super specialization in cardiology (interventional cardiology) from St. Josephs Teaching hospital in London as well as training in cardiology from Japan more than twenty years ago.

Inspired by his mother (who was nurse), he got interested in medical science. His mother’s dedication and satisfaction from her job encouraged him to choose the field where he could serve to the humankind. 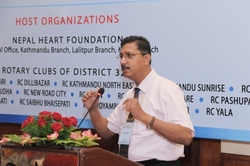 Although medical (science) is a difficult subject, he became successful to make a career in it through his dedication, hard work and discipline. He, however, does not believe that you have to mug up everything in medical science although some things like physiology, anatomy should need some mugging up.

Talking about one of the peculiar medical cases he came through was a case of rheumatic heart disease in a woman. This disease which usually starts at school going age from 5-18 was diagnosed in women of forty who had already given birth to four children. It was found out only during her fifth pregnancy and had gone without any symptoms during her other four deliveries. The medical scenario of Nepal is dominated by the non-communicable disease like HBP, diabetes, etc which are spreading quickly while communicable disease are going down. This problem has become a major challenge in the medical field as they are expected to work for prevention of these disease with the little economic support and poor economy of the people and the country.

He advises the aspiring students of the medical science to enter into the field only if they are interested in it and not because of pressure or any such things. He believes that one should never study out of compulsion, never study with the sole purpose of making money rather be determined to devote yourself to this profession, if they want to be in medical field. The reason behind Dr. Prakash Raj Regmi’s success is his hard work, patience, dedication and compassion.