How Nepal got its name

Nepal, the country of gods, rivers and mountains, is rich in culture and natural beauty. It’s a small country sandwiched between the two powerful nations of India and China. There are interesting theories about how Nepal got its name. 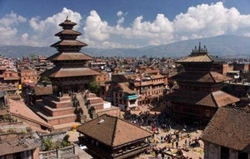 Some believed that Nepal was derived from two words, ‘Ne’ and ‘Pal’ meaning ‘wool’ and ‘tented house’ respectively. Nepal being the land of the Himalayas, yak and sheep, was rich in wools and those wools were stored in the tented houses back then. Hence, the name Nepal.

There is this other theory that says that the word Nepal was derived from the Newari word, Nepa, the old name for the Kathmandu valley. The Newars are believed to be the early inhabitants of the valley, long before the unification process.

The third theory suggests that Nepal might have been derived from the Sanskrit word ‘Nipalaya’, which means ‘at the foot of the mountains’ or ‘abode at the foot’, which perfectly goes with its location in relation to the Himalayas and mountains.

The name Nepal is also supposed to be derived from the Sanskrit word ‘Nep’ meaning the ‘cow herders’, with the suffix ‘Al’. Although this theory is still under controversy, the Nep were the people who came here for the first time from the Ganges plains of India. They were also the first rulers of Nepal who started the reign of Gopal dynasty.

However, according to the Nepali scholar Rishikesh Shah, the ancient chronicles report that it was named after a sage ‘Ne’ who was believed to be here for meditation and later became the protector (pala) of this land.

Hence, the small country of Nepal has interesting stories behind its name, not all of them being authentic though. Some of the theories are still under controversy.