Religious places to visit in Khotang

A beautiful place situated in the eastern part of Nepal, Khotang district is not only rich in nature and cultural heritage but also has significant religious values in the lives of people living in Nepal. Apart from being in a hill region, there are also certain difficulties of transportation on the way to Khotang, however, that does not affect the high religious importance the place holds. There are various temples and religious sites in Khotang district. Some of the most popular religious destinations in Khotang are mentioned below:

The sacred cave that houses the two feet tall Shiva Linga is one of the popular and most important religious destination not only in Khotang but also in Nepal. The cave popular by the name of Halesi Mahadev has two pillars to the north side of the Shiva Linga that stands very close to each other making a narrow pass. It is believed that the sinners cannot pass through this narrow passage and only a confession from them shall grant them a passage through. Every year, thousands of devotees come here to worship the lord with a belief that he could give knowledge, wisdom to the children and prosperity to the poor. 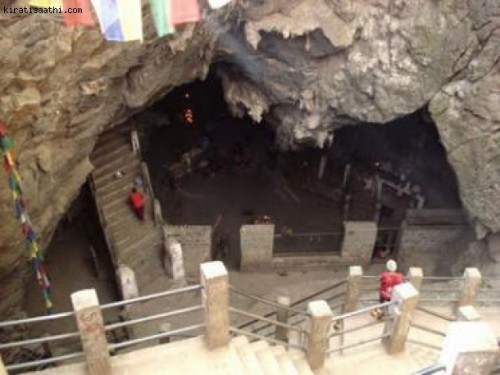 Another popular religious destination is Baraha Pokhari situated at the Baraha Pokhari VDC in Khotang district. The Hindu mythology mentions the creation of the lake in the time immemorial by God Baraha (third incarnation of Lord Vishnu in the form of wild boar). The lake, thus, have high historical as well as religious significance. It is 800 m long and 500 m wide and it is located at an altitude of about 1700m above the sea level. One of the major attractions of the place, it is said that the color of the water in the lake changes along with the season and colorful fish of various kinds are seen in the lake. The beautiful and green surrounding of the pond also adds up to its attractions.

Situated at the headquarters of Khotang district, Diktel, the temple of Kalikadevi is visited by the devotees throughout the year. The place also observes maximum goat sacrifice offered to the goddess by the devotees. A mysterious small cave housing the symbolic image of Lord Shiva near the Kalikadevi temple also adds up to the curiosity of the devotees visiting to pay their homage to the goddess.

A sacred cave situated at Ratanchha VDC ward no 2, Dhodreshwor is not only a sacred site with high religious significance but is also a great wonder of nature. The cave with the capacity of holding 700 people at a time, has several symbolic images of gods and goddesses along with Shiva Lingas on its wall. The cave can be accessed by two gateways, one on its west and another on north and there is also an unfathomable tunnel to the east. Moreover, an opening to the sky near the northern gateway provides light to the cave.

Thus, the presence of these religious and sacred sites makes Khotang district a popular religious destination of Nepal.