Seventh highest mountain of the world

The seventh highest mountain in the world, Dhaulagiri serves as the eastern anchor of the Dhaulagiri Himal, a sub-range of the Himalaya in Dhaulagiri zone of northern central Nepal. It lies on the northwestern side of Pokhara. Dhaulagiri in English translates to ‘White Mountain’. It was discovered by the western world in the year 1808. Then, it was thought to be the highest mountain in the world and the thought remained for 30 years until it was replaced by Kanchanjunga.

Both the south and west sides of Dhaulagiri feature massive drops, each rising over 4000m from its base and each has been the sites of epic climbs. Kathmandu airport is the closest airport from here. The best time for ascending the mountain is during the months of April, May, September and October. The mountain range has fifteen peaks that are all 7000m high and the landscape is the harsh and treacherous. 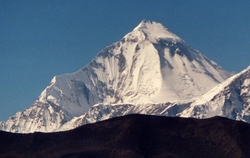 It was first climbed on May 13, 1960 by Kurt Diemberger, Peter Diener, Ernst Forrer, Albin Schelbert, Nyima Dorji and Nawang Dorji, the members of a Swiss/Austrian expedition which was led by Max Eiselin. The expedition used the Northeast Ridge route which had been explored one year earlier by Austrian expedition led by Fritz Moravec. Also, it was the first Himalayan climb supported by a fixed-wing aircraft. The aircraft crashed during the approach and was later abandoned on the mountain.

Hiking and mountaineering experience is just the great in Dhaulagiri Mountain and also the surrounding region is just as spectacular and interesting as one can imagine. It also accommodates the world’s deepest gorge, the Kali Gandaki Gorge. The view from the Himalayan and the region is splendid and mystifying. It is better to go in a team and with climbing gears for a safe and exciting climb.

The seventh highest mountain in the world boasts of beautiful and splendid natural landscapes and thrilling experiences of the climb.