Das Dhunga is a Nepali movie based on a real story and is a political satire as well. Directed by Manoj Pandit, the movie is based on reports by different investigation commissions about the infamous road accident that occurred in a place called Das Dhunga of Chitwan which took the life of two prominent leaders of CPN-UML on Jestha 3, 2050 BS. The movie portrays the series of events and the investigations that followed the death of former UML General Secretary Madan Bhandari and leader Jeevraj Ashrit. The name of the movie was adapted from the place where the incident occurred and also the incident was called by the same name. The movie has raised the question why this mystery wasn’t solved or taken any further? 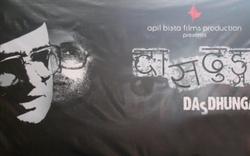 The movie starts with the original black and white videos of Madan Bhandari giving speeches and shifts to the recounting of the event by Amar Lama, the driver who miraculously survived the accident while two other passengers, the leaders, lost their lives. The vehicle fell into the Narayani River on 3rd Jestha, 2050 BS. The movie slowly proceeds towards the investigation of the mystery, unfolding many aspects and struggle of the investigator Kiran Kunwar while trying to solve the riddle. Along with trying to solve the mystery behind the accident, the story also provides the investigation of murder of Lama who gets killed on an open space in Kirtipur with three bullets triggered on his head. With the investigator developing imaginary characters in his mind, the movie also diverts the audience towards new directions of conspiracy behind the accident and tries to present it as a murder rather than accident. The mystery, however, remains unsolved even though the investigator tries his best to solve it, and the case is closed once he submits his report. He is bound to leave the case and his old life behind and start a new life as a lecturer in a campus, however, the mystery haunts him and he reopens the case. What follows is series of threats he receives and he losing his mental balance trying over and over to find answers to the same question that still lies unspoken, in the minds of Nepali people, how did the accident happen? Who was responsible for it?

Those who expect the movie to answer these questions might be disappointed, however, Das Dhunga is worth the watch as it reveals some facts that had remained untold among the citizens. Also, the original videos of Bhandari giving speech and also of the funeral of the two leaders accompanied by a sad song are touché. The movie by the Apil Bista Film Production is a venture to remind the government about the accident and a plea to them to solve the mystery.

The acting is good and the presentation is great. However, the typical detective get up by Anup Baral might seem too much. His acting, nevertheless, is great and also Daya Hang Rai as Amar Lama has done a great job. The movie, although does not solve the mystery, it definitely unfolds the conspiracy and dirty plots in the field of politics.