Majipa Lakhey is a special Lakhey who is also known as the peaceful Bhairab and is also considered to be the protector of the children. This Lakhey dance takes place during the week of full moon in the month of Yenlaa of the Nepal Sambat.

The word Majipa is derieved from the Sanskrit word “Manjupattan” which means ‘the city established by Manjushree’ and the term Lakhey is used to denote a carnivorous demon, hence, the literal meaning of Majipa Lakhey is ‘carnivorous demon of Majipa’.

According to the legends, a Lakhey is said to have fallen in love with a girl from Majipa. So, he transforms himself in form of a human and enters the city to see the girl he loves. When the people come to know his true identity, they capture him and take him to the king. The king makes him a proposal that state that the demon will be granted a place to stay in the city if he promises to preserve and protect the children from other demons and also participate in the annual Yanyaa Punhi Jatra, also known as Indra Jatra. The Lakhey agreed to the proposal he was given and since then he is supposed to be living in Majipa. 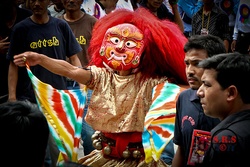 There is also another story regarding the presence of Lakhey in the city. It is said that the two children of the King Sawan Bhaku were banished from the city on the request of Akash Bhairab and Hanuman. However, the two return to the city and claim their rule over it and also declare to devour humans, so the Lakhey is supposed to shoo them out of the city. This story is represented symbolically in the dance performed during the Yanyaa Punhi every year. The Ranjitkars of Kathmandu are responsible for conducting the dance and unlike in other traditional dances, the dancers here are not trained and it is believed that the Ranjitkars have inherited this dance from their ancestors in their genes.

Lakhey dance is one of the most interesting dances performed by the Newar community and there are different types of dances for each celebration. The dances are performed usually during some special jatras and the most special of all definitely is the Majipa Lakhey dance that lasts for a week during the week of full moon on the month of Yanlaa.