Places to visit in Sankhuwasabha district

Located in the Koshi zone, Sankhuwasabha is one of the seventy-five districts in Nepal. The district with its headquarters at Khandbari covers an area of 3,480 km2 and the indigenous ethnic groups of Rai, Yakkha, Limbu, Newar, Gurung, Magar, Abadhi, Sunuwar, Rajbansi, Maithali, Tamang, Sherpa and the caste group  Brahmin and Chhetri reside in the area. The district also has the deepest valley of the world, Arun Valley and is a land famous for cardamom farming. 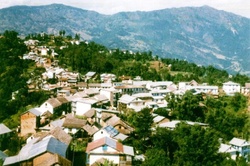 Some of the places to visit in Sankhuwasabha are mentioned below:

It is the holy shrine of the Hindu god Shiva inside a natural cave that is situated at Jaljale VDC of Sankhwasabha district. Although the cave gate is small, the inside of the cave is wide enough to accommodate about 200 people at a time. The dark cave requires the visitors to carry lights while they enter. The cave has a phallic symbol of Lord Shiva which is continuously showered with milky-water from an image of a cow. On the occasion of Thuli Ekadasi in the month of Kartik, (late October-early November), a religious fair is organized at the place. It is one of the must-visit places in Sankhuwasabha district for religious as well as cultural value.

Located at an altitude of 4,240m at the base of Lumba Sumba Himal in the district, Sabha Pokhari is a natural lake that has religious significance. According to a Hindu mythology, a wise ascetic named Byasa (the writer of Vedas, the Hindu holy scripts) once organized a gathering of all 88 thousand sages, saints and ascetics and gave a speech on how human can acquire peace in life time and attain heaven after death. The place where the lake is situated is an extraordinary example of natural beauty and landscape and the place is good for trekking.

The temple of Manakamana Devi is situated at the north of Tumlingtar on the eastern bank of Arun River. The ancient stone image of Manakamana Devi Nava Durga Bhagawati (Durga in her original form) is enshrined in the temple along with an image of Lord Shiva, Lord Ganesh and many more. On the occasion of Thuli Ekadasi, a great religious fair is organized where people from near and far village gather in order to participate in the fair and festival.

This national park and conservation area is one of the must-visit places not only in Sankhuwasabha but also in Nepal. The park houses some of the country’s richest and unique species of plants and animals as well as flora plants and vegetations.