Nepal offers some of the best trekking destinations in the world taking you closer to the nature along with the fun and excitement of climbing adventurous mountains. It also gives you spiritual and cultural experience with the Himalayan Buddhist and Sherpa culture.

It is the easiest and most enjoyable trekking trail in Nepal that takes you to the splendid Langtang valley. About 4-5 hours walk daily for 9 days with the company of the Langtang forest, yak pastures takes you to the Tibetan village of Langtang.

The 14 days adventurous trek to the base camp of the Annapurna Himalayan takes you through the major peaks like Himchuli, Fang, Annapurna South and many others experiencing multiple climate, ecosystem and cultures along the way. The best part of the trek is the gigantic gorge between Himchuli and the Fish Tail (Machhapuchre) mountains following the dense bamboo forest into the Modi Khola Valley. 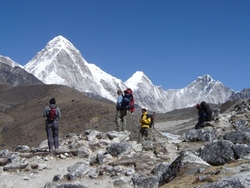 It is the shortest trek of Nepal taking only 9 days and does not require any particular fitness levels. It is perfect for those who just want the taste of trekking without any particular difficulties or spending lot of time. One can observe the breathtaking Mountain View, traditional and rural culture.

The Everest Base Camp trek allows you the perfect view of the tallest mountain of the world. The 17 day adventurous trip not only allows you the most stunning views of the glaciers, mountains and valley but also introduce you into the lives of the Sherpa community.

The trek takes you to the spectacular views of National Park that accommodates many rare species of animals like Himalayan Black bear, Red Panda, Wild Boar, Leopard, Black Panther and numerous kinds of birds and smaller animals. The best part of 16 day trip is the Rara Lake located at an altitude of almost 3,000m.

The Mustang trek or the Forbidden Kingdom was open to westerners only back in 1992 holding lots of mysteries to uncover. Due to Chinese occupation, Mustang area represents Tibetan culture more than Nepali. The trek permits are issued under strict surveillance from the Nepal Department of Immigration in attempts to preserve the cultural and ethnic values from western influence. The 15days trip offers the splendid views of Nilgiri, Annapurna and many other peaks.

It takes you to the area of the 8th highest peak of the world. It is one of the toughest and challenging treks in Nepal. It takes you closer to the rich cultural and historical heritage as well as different flora and fauna.

It is only for the experienced or professional trekkers as it has rough landscape. The 24 day challenging trek takes you to the wilderness and remote villages of Nepal. The trekking around Dhaulagiri region is very strenuous and requires additional climbing skills.

It takes you around some isolated areas of western Nepal where the locals practice Bon Po religion that had been widely spread in pre-Buddhist Nepal. The 25 days trek takes to through three major passes namely Kagmara La, Baga La, and Numa La.

The 9 day trek is the best for the beginners in introducing them to the trekking in Nepal. The highlight is the breathtaking view of the snow capped mountains from the highest point of 3200m.