One of the most famous comedians in Nepal, Haribansha Acharya is one of the two legendary comedy-acting pair MaHa Jodi, other half being Madan Krishna Shrestha. Together the pair has been successful to win the hearts of the people, even alone, he has created his own identity, however, most often he likes to call himself part of the pair.

He was raised by his sister and sister-in-law after the death of his parents when he was still very young. Naughty during his childhood, his mischief performed then has proved to be useful to him at present. As a child, he loved traveling on the Sajha bus (public bus) and dreamed of becoming a driver when he grew up. He had never imagined he would end up being a comedy-actor, let alone be the superstar of Nepal. 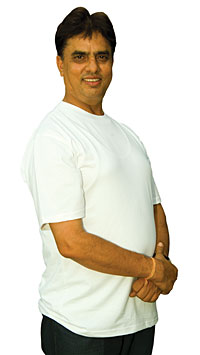 He remembers his friends laughing at his talks, without understanding the reason. He used to participate in school programs and has received many certificates as well. Later, he went on towards stage performance where he received many medals and prizes (cash) and during Gaijatra Mahotsav, he received a gold medal which encouraged him to leave the dream of being a driver and move forward towards acting.

He had met Madan Krishna Shrestha during Gaijatra Mahotsav and they used to perform separately back then. Once during the occasion of Silver jubilee of Nepal Rastra Bank, a function was organized where King Birendra was supposed to come. Because of this reason, the program needed to be finished on short time and they were advised to work together. After that Acharya and Shrestha performed together in Gaijatra Mahotsav and also sold audio CDs. Since then, they have been together.

He believes that one should also have academic backgrounds before they come to this field as it will help them get recognized in the international market. One who had lost everything during his childhood days, he had started earning since the age of 16 years. The first salary he had earned was Rs.135 and he had kept Rs. 35 for himself, giving Rs.100 to his sister.

He, along with his partner has also been awarded with various awards, recognitions and honors. This comedy actor has also sung some popular comedy songs during the 90s and has also acted in movies like Balidan, Taa ta Sarai Bigris ni Badri, etc.