Nagdaha is a beautiful lake with a high religious value, in the Dhapakhel Village Development Committee that takes up about five hectors of the area. The place also allowed boating, however, due to some security reasons, it was stopped. 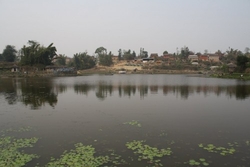 In the village of Dhapakhel, this pond with a statue of nag deva (snake god) is quite an amazing and peaceful place for relaxing. The place could be reached by boarding a bus from Lagankhel bus-park and five minute walk. The pond contains the water plant along its border at one side. The place not only holds tourism value but also religious as the image of snake is worshipped during the Nag Panchami on the Nepali month of late Srawan or early Bhadra.

It is believed that in ancient times, Lord Shiva used to live at Nagdaha which made the goddess worried about her own decreasing number of devotees. She then transformed herself into a pig and started making grunting noises. Lord Shiva thinking that the lake was dirty because of the existence of pigs there went in search of clean place and settled himself at Gosainkund Lake in Rasuwa district.

There is another legend that unites the two lakes, Taudaha and Nagdaha of the Kathmandu valley. It was said that a female serpent lived in the Nagdaha and a male in Taudaha. Every year during the rainy season, the male serpent visited Panauti to participate in a Jatra. He used to visit Nagdaha during his journey two and from Panauti as Nagadaha is on the way. In Nepal, the snakes are believed to bring good rains and prosperity to the country.

It is also said that when Manjushree drained the Kathmandu valley with a sword cut through the Chobhar hill, the ‘nagas’ were allowed to live in the newly created small lakes and the Basuki Naga, was allowed to stay in Nagadaha.

Another legend says that the people used to pray to Nagadaha when they needed utensils for festive occasions or ceremonies. Their prayers were answered and the utensils appeared miraculously on the lake. The utensils were cleaned and returned to the lake after use but one day, a person did not clean them properly before returning and from that day on, the God of the Lake got angry and stopped providing utensils.

The village people use the lake for various purposes like washing clothes, bathing, fishing, irrigation, recreational activities, tourism as well as religious purposes.