Established in 22/10/2066 BS, Nepal Consumer Development Bank Limited is a complete public owned bank with prominent businessmen, bankers, intellectuals and professionals as its promoters. Located in Kaski district of Nepal, the bank was established by eighty five promoters as its shareholders. The bank is managed by a team of experienced and professional bankers with the commitment of providing best services to achieve excellent value to the investors and stockholders at all times.

Established under the Company Act of the country as a public limited company, the bank has achieved a ‘B’ class financial institution license from Central Bank of Nepal. Nepal Consumer Development Bank is a regional bank with the permission to operate and establish its offices and services within ten districts of the country. These districts include Kaski, Tanahun, Lamjung, Chitwan, Makawanpur, Kavre, Nawalparasi, Palpa, Gulmi and Baglung. The bank was established with Authorized Capital of NPR 400 million, Issued Capital of NPR 200 million and Paid Up Capital of NPR 200 million (including sixty million from the general public). Thirty percent of the shares lay in the hands of the general public while the other seventy percent is collected from the promoters. 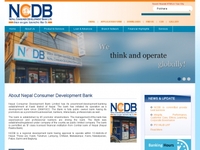 The major objectives of the bank are to contribute the sustainable development of the country by mobilizing domestic saving and channeling them to productive and social areas, to use the latest banking technology to provide better reliable and efficient services at a reasonable cost, to facilitate trade by making financial transaction easier, faster and more reliable through relationship between money transfer agencies, commercial banks and to offer good working environment to the employees and to contribute the overall social development of Nepal by opening branches at the banking service needy areas.

The finance company entered into a merger with Subhalaxmi Finance Limited and Reliable Finance Limited in 2014. The merger started operating as ‘Reliable Development Bank Limited.’ The bank was later acquired by Global IME Bank Ltd. in 2017.